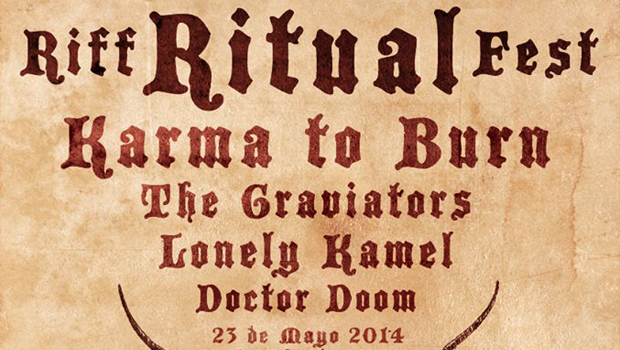 We’re absolutely thrilled to announce that a brand new heavy festival is about to take place in Barcelona, aka Spain’s hottest city. Indeed, RIFF RITUAL FESTIVAL is adding itself to the ever expanding map of European heavy music events, its first edition being launched on May 23rd with Karma To Burn, The Graviators, Lonely Kamel and Doctor Doom. Sick.

All blurbs courtesy of the festival.

The american trio formed by Will Mecum (guitar), Rob Halket (bass) and Evan Devine (drums) needs no introduction. Their powerful instrumental compositions and rampaging live sets made of them living legends of STONER ROCK a long time ago. They have toured all around the world, played at the most important festivals (Hellfest, Sonisphere) and shared the stage with titans like Clutch, The Sword or Neurosis. Next May 23rd they will headline RIFF RITUAL FEST and are willing to crush our souls with an outstanding performance full of desertic riffs and the classics of a genre. Next April 21st comes out, through H42 Records, the band’s new 7″ single. It will include the new song “Fifty Three”. We hope to hear it live at festival.

The swedish four piece will visit Spain for the first time in an exclusive show that will only bring them to Barcelona. The band was formed in 2009 by Niklas (vocals), Martin (guitar), Johan (bass) and Henrik (drums). They will bring the doom element to the festival. The band has been growing since their debut album came out the same year they were formed. Then came a split ep with Brutus, their incredible second album “Evil Deeds” (2012) and some tours across Europe (including one with Saint Vitus) and festivals. Their third album “Motherload” is coming out next March 28th through the label Napalm Records. It’s one of the most anticipated albums of the year for the followers of the doom genre. Disciples of Black Sabbath and Pentagram… We will be able to listen to their new songs live at Riff Ritual Fest.

The quartet of Oslo (Norway) formed in 2005 by Thomas Brenna, Lukas Paulsen, Stian Helle y Espen Nesset will visit us for the first time in an exclusive date in the country. It’s powerful combination of stoner, with high dosages of blues and hard rock has helped them build a loyal fan base across Europe. The time has come for Spain to also succumb to it’s wondrous proposal. They have three studio albums and are preparing the fourth, to be released next September. They have toured Europe several times, played at the festivals you all have in mind and shared the stage with the best known bands of the genre. Finally we will have them in Barcelona… And they are ready to raze the city with their RIFFS

The young band only has released a 3 song EP through STB Records which sold out in only 3 days!! Their sound is a personal mix of 70’s psychedelic hard rock doom. They sound totally vintage and one can hear echoes of bands like Black Sabbath or Pink Floyd in their music. They will start the festival with their hypnotic RIFFS. Don’t miss the chance to see live one of the European stoner revelations of the year!