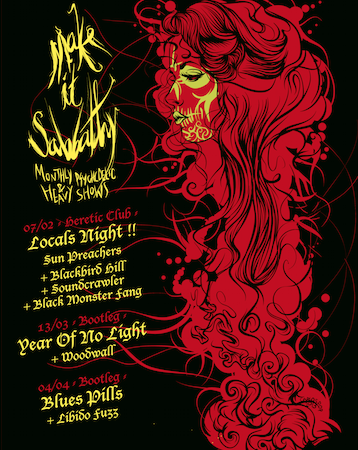 Monthly heavy & psyche rendez-vous MAKE IT SABBATHY is back in Bordeaux. For now, only three shows were confirmed, but given the fine selection of heavy acts they’ve been inviting last year, we sure can count on MIS to deliver South West France its dose of psychedelia and fuzzy grooves… More to be announced soon!

For their first gig of the year, Make It Sabbathy will be hosting a 100% local acts night, with rock and metal newcomers only. No curfew!

YEAR OF NO LIGHT or France’s most renowned doom metal band (even though their music spectrum goes from drone to post-metal). After their well acclaimed record “Tocsin” (released in 2013 and reviewed here), YONL will be offer us their first performance in Bordeaux since the release of the album in November, which will be followed by a bunch of festivals appearances this spring. To open this 100% heavy night, Italian prog doomers WOODWALL will play their first gig in France ever. Damn lucky Bordelais.

The Swedish/French/American outfit BLUES PILLS have made the news in 2013 for a reason: if it weren’t for the unexhaustible wave of 70’s revival rock bands, they’d still stand out from the crowd thanks to these incredibly talented musicians and Elin Larsson’s Joplinian vocals. To open this bluesy ceremony, Bordeaux’ LIBIDO FUZZ will deliver a few pieces of their latest psyche boogie EP to date “We’re a heavy psychedelic boogie band”. Hot!

To get in the mood, just listen to the MIS sampler.