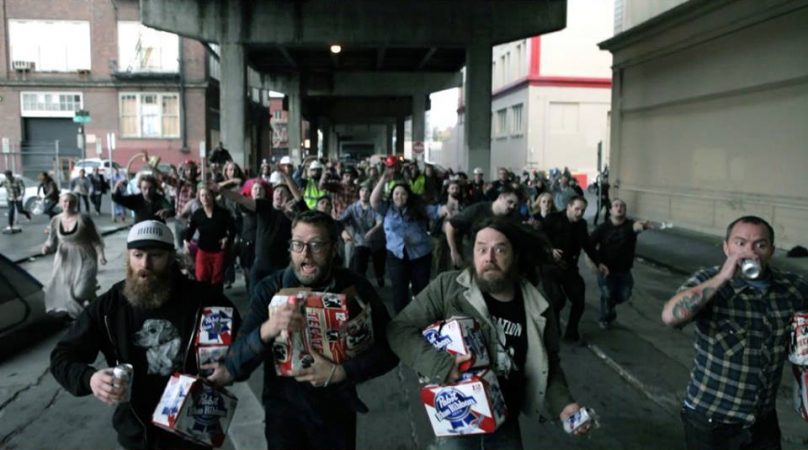 A few weeks before Christmas holidays, both bands and music labels decided to double efforts by providing us more than just some spiritual food: they decided to celebrate with a real visual feast. The abundance of brand new music videos is also the occasion to launch this new section dedicated to the latter. Let’s get off to a roaring start with Red Fang, Truckfighters, Vista Chino, High On Fire, Intronaut, Horisont, Domadora and Gurt.

Red Fang are well known for their offbeat and super goofy videos (all directed by their long-time buddy Whitey McConnaughy), putting themselves into crazy – and sometimes ridiculous – situations. And that’s precisely why the whole rock planet got into these guys. As darker and heavier as their latest record “Whales & Leeches” can be – which has caused a great stir among both the press and fans – it’s obvious that the four Portland rockers haven’t lost their sense of humor. On the menu of this first official video off the new album: Pabst Blue Ribbon (what else?), zombies, and hysterical… laughters.

Through their many performances across Europe this year, we have been able to get a glimpse of what the Swedish fuzz trio’s new record “Universe” (out on January 24) would be about. This first excerpt simply entitled “Prophet” shows Truckfighters’ will to go against their own current, by introducing a way-more-pop direction that will certainly appeal a brand new crowd to their gigs. To the great surprise of many fans, the desert sound imprint has disappeared, while Oskar Cedermalm’s vocals are brought out to front in the most gorgeous way possible (fans of his other project Greenleaf will love it). Likewise, the video showcases the band’s brand new vibe, and it’s definitely not your average rock video. Watch and see.

To me, the debut effort of Vista Chino – aka formerly Kyuss Lives aka hello law courts – was no great shakes. Anyway, we’ve all been so happy to see them back on the saddle and hear Garcia sing at the top of his voice on Brant Bjork’s groovy rhythms, because of we’ve been awaiting for so long to catch the slightest glimpse of what used to be la crème de la crème of Palm Desert’s rock scene. The video for “Sweet Remain” is like the band itself: it goes straight to the point, no more, no less. They didn’t want to get themselves too much of a headache, it’s pretty clear. But hey, it’s Vista Chino, so we’ll delightfully watch the whole video, because this track is pretty cool anyway.

As you can imagine, this video doesn’t feature Shakira. Once again, Swedish rockers Horisont delivered a sample of their very own off-the-wall and super kitsch visual imprint. This time it’s about a muscle car chasing ferocious wolves. Or the complete opposite, I’m not quite sure anymore. Things remain the same with fellow vintage rockers Orchid though: from time to time, we’d rather watch a more conventional (boring?) video, just in order to get the whole point. One positive thing anyway, is that it gets us to focus on the song itself. After all, isn’t it the main purpose of a MUSIC video?

The award for the most insane video is attributed to… High On Fire! Enslavement, lobotomy, not so wild animals, a balls-kicking metal sonic slaughter… Taken off the 7″ single record (available for free download on Scion A/V), this song is nothing but raw violence. Not only it’ll enslave you, it will also punish you. Even though the expression “slaving the hive” doesn’t make much sense per se, Matt Pike and his friends clearly decided to be this X-mas perfect troublemakers. My eyes, it hurts!

Taken off their wonderful new album “Habitual Levitations (Instilling Words with Tones)”, this song is a pure delight for all post-metal addicts. Keeping up with the arty vibe, the Californian outlet released a video that makes us feel like we put Sauron’s Ring onto our finger… or like we’re completely wasted! This forest adventure/thriller short movie has nothing thrilling, really, yet I really encourage you to check out “Habitual Levitation” in its whole, as it is filled with a bunch of really exciting stuff.

This video made by French psyche rockers Domadora is by far one of the most interesting things I’ve seen this year. Not only they racked their brains to put on a real story, but they also called real actors to do the job (or at least, really good amateurs). Over the seven tracks of “Tibetan Monk“, “Chased & Caught” might be the only one that doesn’t ooze this Colour Haze-ish jammy vibe dear to their hearts. However, you’re in for a treat with this quality short film. Kudos, guys!

In the “filthy metal” family, some bands have a strong taste for our fluffly four-legged friends… I mean, not as a dinner, but because they really dig being surrounded with animals. Gurt is one of these bands, and they could have been awarded for their already classic home made video “Dudes With Beards With Cats” (the title says all, QED). But as they thought one nutty video wasn’t enough, they decided to illustrate their very much sludgy cover of X-Mas carol “Little Donkey” with a totally weird vid… including, of course, donkeys! We’re hailing the gesture, because they had the nerve to do it. Gurt FTW.