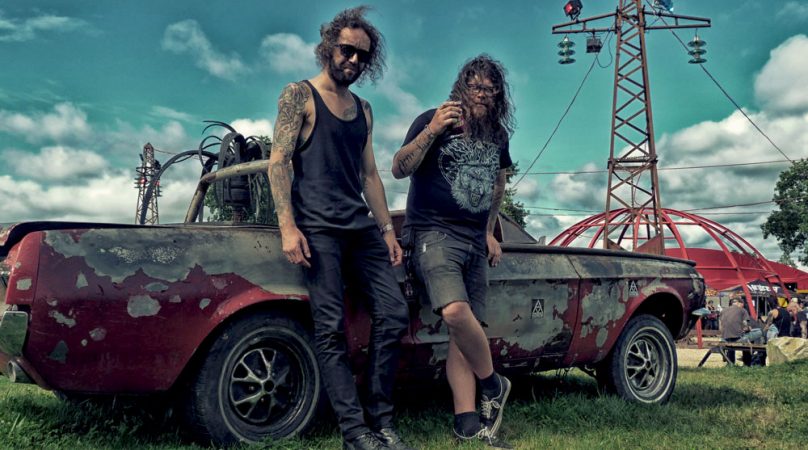 As fortune would have it, some well-intentioned friend makes you listen to a band you’ve only heard about by name, you end really digging their music, then oh luck, High On Fire cancel their venue at Hellfest 2013 and this band is once again unexpectedly put on your way. This is how I discovered, liked and met BISON within a few weeks. This sludge band from Vancouver, Canada, delivered their filthy raging metal all around Europe along with Black Cobra and Årabrot, to finally end their course on the Valley Stage at Hellfest 2013. After they siphoned off the audience’s eardrums and smashed a bass on stage, I met two of the four Bisons in the festival’s VIP gardens, somewhere between a performance of Saxon and Europe’s live rendition of “The Final Countdown”. The least we can say is that James and Matt are never at a loss for words, their outspokenness being served with a total laid-back attitude and a great sense of humor. As I said, “chilling out in the grass with BISON”…

Now you just want to hear that.

How do you feel about this performance you just did at the Valley ?

James (guitar & vocals) : It was great ! It’s the last of our European tour so it’s really great when it ends this way.

Yeah, the response from the crowd was really good, besides I’m sure many people didn’t know BISON before seeing you this morning.

James : That’s that thing, right ? We have to take advantage of playing our hearts out. And it’s so much fun, a nice big stage where you get to run around and act like an idiot, throw beers into the crowd and what not…

You toured Europe with Black Cobra, how did this tour go on the whole ?

James : It was great… (we just catch sight of Matt, the drummer, who apparently failed to get shots of Jägermeister at the bar)

And then, are you gonna tour some more ?

James : And then, we’re gonna record some new material, start a fresh new album. Dan, our guitar player, is expecting a child in the middle of August, so we’ll let him “shit out his kid” and hang out with it for a while… Yeah, that’s what we say in Canada !
Matt (drums) : You’re shitting out a kid, congratulations ! (laughs)
James : Yeah, so we’ll do all that before the end of the year. We don’t have that big Metal Blade budget anymore, so I guess we’re just gonna bring a ghetto blaster into the jam spot, hit “record” and then release that… Whatever.
Matt : Everybody will fucking hate it ! That’s the plan.

So obviously, you’ll have to self-produce the new album.

M : Yeah, we’ll go home and go back to work, and save some dimes. And our wifes will hate us for spending money in our band…
J : Just like a working band does. We go home, we make some money then we record an album. We don’t beg for money on the Internet.
M : Fuck Kickstarter and everybody involved on that shit !
J : Fuck all that shit ! I’m gonna go home and work my fucking day job, save my money and record the next fucking record, that’s what’s going to happen ! LIKE A GROWN-UP ! (laughs)

Fuck Kickstarter ! I’m gonna go home and work my fucking day job, save my money and record the next fucking record, that’s what’s going to happen !

What do you do for a living ?

J : I’m a mental health worker. Matt and Masa are too. Dan is the only one who’s not a budget social worker.
M : He’s a father-to-be.
J : Unemployed, actually. Which is allowed in Canada, because if you have children, they just pay you. We’ve got so much space to fill…. “Congratulations, you don’t know how to use a rubber, here’s some money !” (laughs)
M : We’re very liberal in Canada… Rubbers are outlawed.

J : No, music, going to gigs, seeing each other’s bands, hanging out… How many records did you release through Metal Blade Records ?

J : “Quiet Earth”, “Dark Ages” and “Lovelessness”. But they kind of fucked us on “Lovelessness”, they dropped us half way through, so I don’t think this record got a fair shake.

Yeah, but touring over here might have helped a little bit, I guess…

J : I know, because the response on the new material has been very good !
M : Thank you Europe !
J : I think that’s our new plan, just touring Europe… (laughs)
M : The crowds here are very appreciative and supportive, hospitable. I mean, Canada was great to us, but it seems like no one gives a fuck about us in America. So yeah, we’ll be back.

What about the music scene in Vancouver ?

M : Well, let me tell you about it. It is great.
J : It is flourishing right now ! It’s really getting momentum and getting really good. People are trying to build a really solid music community in that city where you have nowhere to really play… It’s a good start, there are good bands, man.
M : There’s a really good punk and metal scene, so it’s genuine. People play because they like to play, they stick together, there’s a good sense of community.
J : More often than not, yes. It’s not like some utopian fucking “fringean” music scene, you know ? There are some douche bags and assholes overdoing it for completely the wrong reasons, but you need that to balance it out. You need to get inspired even by the douche bags, right ?

The music scene in Vancouver is flourishing right now ! It’s really getting momentum…

Haha, there probably are a good source of inspiration ! Speaking of that, in your biography you wrote that your music is so dark because of the place you come from. Why is that ?

J : I love where I live, but the balance of power is about the rich getting richer and the poor getting poorer… It can be a really difficult challenging place.
M : But it makes it good for art. Speaking for myself, it’s easy to get dark… (James interrupts and tells us to turn around to watch some semi-naked girls walking on stilts in the garden)
J : See ? This would never ever happen in Vancouver. The women in Vancouver, maybe they get to six feet tall, but they don’t get that tall. (laughs)

And they don’t wear leather panties…

J : Oh there isn’t that much leather… Or that might be a climate thing ? I don’t know what it is, but they don’t get that tall.

M : (laughs) Yeah, it’s good to be here. Enough about Vancouver, let’s talk about how things are right here.
J : So this is Hellfest, it’s our first time experiencing this and it’s a little overwhelming. There are so many people here !

Yeah, Hellfest brings out many many different kinds of people.

But I think Hellfest is a pretty unique event in Europe, in that it puts together many very different genres of metal. You have hardcore, death metal, black metal, stoner, mainstream shit…

J : Mainstream shit ! Dude, that’s his thing, right ? (laughs)
M : Like 3 Doors Down who play right before Down !
J : That’s wild, mixing our band in a festival with fucking 3 Doors Down and Europe. It’s so good !

By the way, which bands did you see today and who are you going to see before leaving tonight ?

J : We went and watch Saxon play, it was fantastic. We saw Aura Noir. I’m interested in seeing Pallbearer and At The Gates play…
M : Kreator !

What about Sleep and Neurosis ?

Sleep and Neurosis. (laughs) Pallbearer as well, and maybe Terror…

J : I’ve lost touch with the new hardcore scene, so other than Agnostic Front, Sick Of It All, Negative Approach, I don’t really know about that music anymore. In the 90’s, I was really into it !

If you’re down, then it is BISON. The BC is legal bullshit.

So, maybe you’ve been asked this one a lot, but : is the name of the band BISON or BISON BC ?

Both : BISON.
J : If you’re down, then it is Bison. The BC is legal bullshit, and we don’t have to worry about that anymore. (At that very moment, another guy joins us in the grass) Oh, it’s our dear friend Kjetil from Årabrot which we were touring with Black Cobra ! They’re fantastic. It was a breath of fresh air touring with these guys.

I know only a little about Årabrot. James, you were wearing one of their t-shirts on stage this morning, weren’t you ?

J : Because I want the world to know about Årabrot ! This time was the best time I’ve had in touring Europe, for sure. And I want to play more of these kinds of festivals, because in these weird exclusive little clubs, it’s hard for smaller bands like us to break into, you know ? Hopefully, we’ve shown somebody here that we can entertain…

Speaking of which, there’s one thing I really wanna know. Does your bass player often smash his bass on stage ?

Both : Every show…
J : We’re looking for a bass sponsorship that will just give endless basses…

Because when I saw that, I was like “oh, it can’t be a very expensive bass anyway”.

M : It WAS a very expensive bass, like $3,000, like a late 60’s Fender Jazzmaster…
J : No no, it was made by this Tibetan monk in the Himalayas, handcrafted and blessed by some God, somewhere… (laughs) 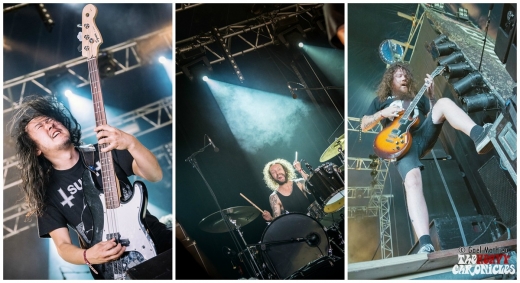 The live is visual, it supposed to be more thrilling and involving. That’s why we do dumb shit…

So the people who got the pieces should be VERY grateful, then.

J : I expect to see that on Ebay tomorrow !
M : That’s all we got. The music, I’m sure, was absolutely inaudible but the one thing that people remember is that he broke his fucking bass.
J : The performance is always key when you go on tour. It’s different from the recording art, if you wanna hear me play my songs the way they sound on my record, then go fucking listen to my record. The live is visual, it supposed to be more thrilling and involving. That’s why we do dumb shit…

But you do it well !

Alright. My last questions is : what are the records you’ve been listening to lately and you’d really like to recommend to the people ?

M : Let’s throw Årabrot out there again ! The new one “Solar Anus”. Keep you ear into the ground, kids !
J : I listened to the newest Deftones record, it’s a very good record. The “Lava” album by Sludge.
M : Incantation “Onward To Golgotha”, it’s a record I’ve come back to after twenty years. (we end the discussion talking about our personal favorites)

ORANGE GOBLIN “We don’t care about sounding retro, we leave that to the bands that do it well.”