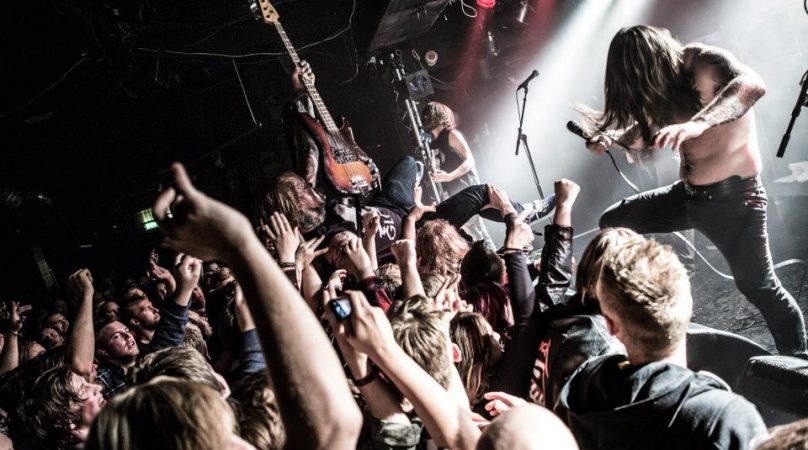 The Heavy Chronicles and Hibooking give you tickets for a pretty unique night : KVELERTAK, TRUCKFIGHTERS and EL DOOM & THE BORN ELECTRIC at Le Glazart in Paris (France) on March 15th. Crazy black’n’roll, kicky fuzz rock and progressive rock : be prepared to have the time of your life, with a 100% scandinavian lineup that has nothing to prove on stage. Don’t wait, enter the contest to win your ticket, this gig is already on you to-do list ! (Photo : Marius Viken)

To enter the contest, just send
YOUR NAME + SELECTED GIG to beehova@room72.net

The winners will be informed ONLY on Facebook a few days before the gig.

Norwegian band KVELERTAK (Facebook) created a stir in 2011 when they came out of nowhere and released their first eponymous record, with all the Gods approval. Kvelertak is a frozen tornado, hitting with hardcore punk and (sometimes black) metal sounds, with a sprinkle of rock’n’roll party spirit. When they’re not doing their own music revolution on studio, they rock the stages all over the world with the spite of viking descendants. Their upcoming second record “Meir” will be out on March 26th, so this gig will be the perfect time to discover new songs before the hoi polloi.

TRUCKFIGHTERS (website) are the kings of fuzz. With a capital F and two capital ZZ. It’s like, the further in the North you go, the more chances you have to hear round and warm rock, with groovy bass and hypnotic saturation. With a new drummer (former Mustasch) and three excellent records in store, TRUCKFIGHTERS are part of this emerging stoner scene of the 2000’s. They clearly got a pride of place next to the unquestioned kings KYUSS. When performing live, they’re a bulldozer, an boiling energy ball. Fancy getting a sunburnt in Sweden ?

If the name EL DOOM & THE BORN ELECTRIC (Facebook) doesn’t allude to heaviness, power and wild riffs, then you should go and clean your eardrums right away. Striking and intriguing, their music reminds of the good old NWOBHM with a certain modernity and progressiveness. They’ve been described as closed to Deep Purple, Rush, Opeth and Mastodon. See ? You’ll get happily nutty with this band. This sure will be a great moment of live music !

[CONTEST OVER] Win tickets for THE OCEAN, INTRONAUT, UNEVEN STRUCTURE, THE ATLAS MOTH and CASTLE in Paris