Win a ticket for TWEAK BIRD + MARS RED SKY and SUNGRAZER + THE MACHINE in Bordeaux ! 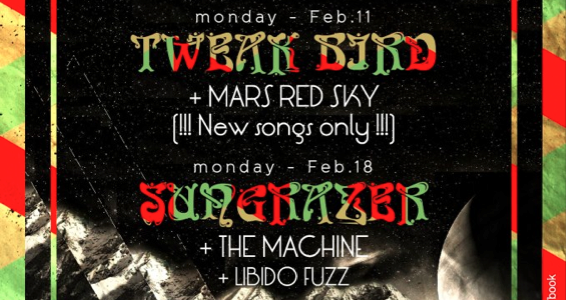 Slice Event & Pizzas and The Heavy Chronicles give you the chance to win tickets for TWEAK BIRDS + MARS RED SKY and SUNGRAZER + THE MACHINE + LIBIDO FUZZ in Bordeaux (France) on February, 11th and 18th. This is the dose of stoner and psychedelia you need, because this music genres aren’t quite the target of local promoters here. But it’ll get better eventually… However, be prepared for a real stoner invasion two Mondays in a row with these “Holy Mondays Mirror Parties” nights at Saint Ex, take your chance !

TO ENTER THE CONTEST, JUST SEND AN EMAIL WITH
NAME + THE GIG YOU WANT TO SEE to beehova@room72.net
Winners will be informed on the blog’s Facebook page a few days before the gigs.

◆ TWEAK BIRD ◆ (US)
The Bird brothers, both born in California, are the proud torchbearers of a very fuzzy flower rock. Imagine that : heavy drums and angry riffs combined to high-toned pop voices. That moment when you realize you’re just headbanging in your room. Songs are short but catchy, and the band’s creativity will definitely seduce even the most reluctant rocker/stonehead. And for God’s sake, they opened for The Melvins in the US this fall ! Check out their latest EP “Undercover Crops”.

◆ MARS RED SKY ◆ (Bx)
Stoner icons “à la bordelaise” are back in town, with a set only made of new songs. Time for the fans to discover the new stuff, the sequel to  “Strong Reflection”, “Curse” or even “Marble Sky”, and dream about the desert’s sun and a chilled bbq under moonbeams. This is fuzz in all its greatness, so beware.

◆ SUNGRAZER ◆ (NL)
Signed on the same music label as Colour Haze, Dutch band SUNGRAZER is without the shadow of a doubt THE stoner rock revelation of this early decade. Their catchy combination of fuzz whirs, subtle psyche jams and so 70’s pop feeling will turn into a desert storm once on stage. Your soul will be mesmerized and released at the same time, you’ll live a unique live experience : SUNGRAZER is a an absolute must-see for every stoner addict !

◆ THE MACHINE ◆ (NL)
The Machine is a really promising band. And  for good reason, they already played the stages at renowned festivals Roadburn and Stoned From The Underground. The Machine bring out more the psychedelic side than their brothers in rock Sungrazer, but they still have so much in common that they will release a split album four days before the show. It’s your chance to get it for a good price at the merch !

◆ LIBIDO FUZZ ◆ (Bx)
Here’s a young band that blends garage energy, the  late-60’s spirit of Haight Ashbury and sometimes a little craziness, Eagles Of Death Metal style… Quite the risky bet for a band that hasn’t tread upon the stages a lot yet. But it’ll sure make a good discovery ! 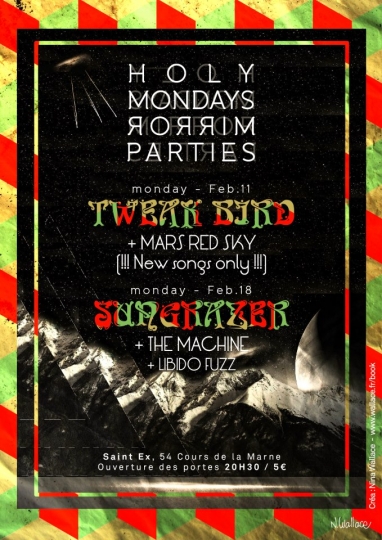 [CONTEST OVER] RED FANG in Paris : win your ticket !