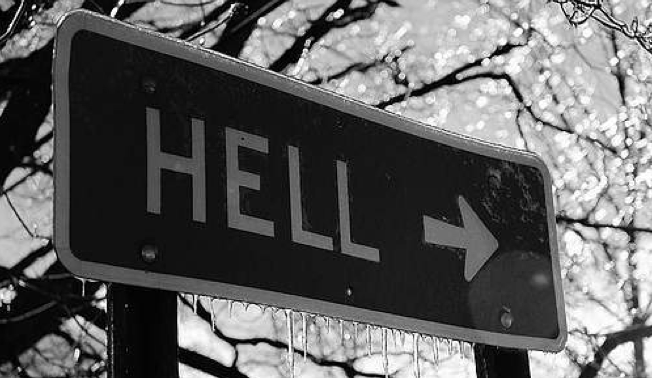 Being consensual and saying “hey, it’s time to review this year’s releases and give a top 10 for 2012” ? Nah, actually it was more a matter of lack of time, so consequently our favorite 2012 albums were reviewed a bit late, like a last-minute Christmas shopping session. However, the T.H.C sack doesn’t contain any sell off article, but only blue-ribbon items which highly deserved their place under the sun. The top-sellers stand next to the rookies, and that’s how we like it : knowing that everything is still possible, that the frontiers remains only in some people’s minds. For that reason, we’ll keep smiling, being curious and listening to everything. 2013, we’re more than ready.
(NB : a handful of records weren’t included in that selection because they were kickass enough to get their own review made previously – check out the “Album reviews” section for more love). 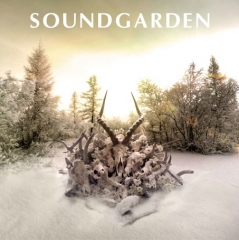 Starting this selection with one of the most anticipated rock albums of the year, what a tricky thing ! 16 years after their latest record  “Down On The Upside”, which led the band to a predictable end, Cornell, Thayil, Shepherd and Cameron prove to scads of critics that they can still play together ! In the same soft rock vein as its predecessor, this album enjoys Adam Kasper’s stunning work on the production, plus a handful of marvellous songs such as “Bones Of Birds” and “Taree”. The rest is only rock’n’roll. Thayil’s genius  remains way too discreet in my opinion, and even though Cornell’s voice has regained its greatness, the muffled mixing on it makes the whole record lose its impact. An album to enjoy as an appetizer… 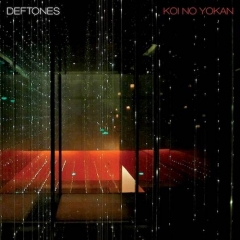 DEFTONES is part of those bands born during the nu-metal bloom who managed to play their cards right, impose a unique and recognizable style, and stand the test of time without getting ridiculous (cf. Limp Bizkit, who never quit their baggy jeans). And because  “Diamond Eyes” was a first-class release, this new album has been even more awaited. As we already know, Deftones is a sensual band who likes playing striptease. That’s why “Koi No Yokan” puts on a thick armor made of metal and angry riffs, and unveils its experimental and off-beat side only progressively (which was initiated with Chino Moreno’s previous projects Team Sleep and Crosses). Low-tempos songs almost sound like new age music, like it or hate it. Anyway, the world Deftones created a while ago remains, and as usual, we will let ourselves dragged with delight…

★ Higher in the cosmos ★ 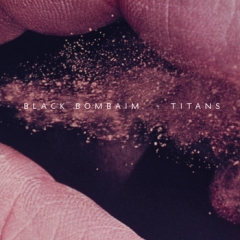 My first experience with BLACK BOMBAIM was a live one, so I can guarantee you that the feelings provided by their psychedelic jams are beyond reasonable. With its characteristic generosity, the three-piece from Barcelos delivers four long tracks, within a profusion of fuzz, whirls of Floyd-like moments that we’d like to be endless. If you were looking for conformity and pedantic songwriting, then you hit the wrong door. “Titans” is a world full of hot jams, where things are dematerialized in many ways and humans adopt shapes that we thought only possible in our dreams (or nightmares). The concept of “stoner” is fully realized with this band. The sound is thick, heavy and round, yet the listener takes off within 2 seconds. As Earthless would do (hey, isn’t it Isaïah Mitchell on “C” ?), “Titans” opens an intergalactic path between two worlds, and our minds finds its pleasure wandering there. I think Black Bombaim offered us a sightseeing of the universe. Thanks. 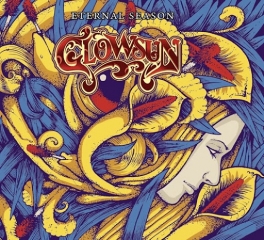 GLOWSUN has been a cornerstone in the french stoner landscape for a while now. Stating they play stoner rock is awfully reductive, because their music is more of a mystic experience than anything else. “Eternal Season” takes it time to reveal itself, the same way the band likes to put encense sticks on stage before starting a performance, in order to set the mood. It’s only when Jaccob’s vibrating guitar triggers its power that we realize the wide range of atmospheres of this album. The singing parts lie low, which is an asset that allows us to enjoy the record’s hypnotic emanations. Somewhere between the My Sleeping Karma constellation and the Lowrider galaxy, the glowing sun of this eternal season won’t stop shining. 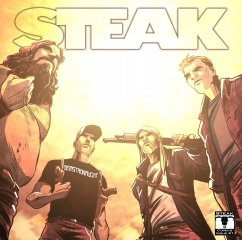 Admit it : you were at first intrigued by this band because of its name. Because food makes the world go round, and because the simplest things are sometimes the best. The first EP of this recently formed British band is made of fuzzy, rough and very enthusiastic stoner rock songs. Listening to STEAK gives the same comforting and invigorating feeling as having an after-work fresh pint of beer. “Disastronaught” is punchy and blazing, and even after a track called “Peyote”, you would feel all disheveled and red as a beet, like after a good ol’ barfight. This band’s forthrightness and love of sound is already making it a rising star of the European scene. That’s the reason why they opened for Truckfighters on their latest U.K tour, and will be playing Desertfest 2013… Follow them ! 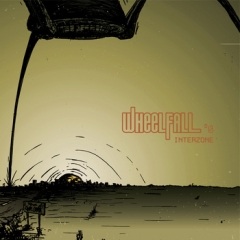 “Ooh la la !” would say Homer Simpson. Well yes, it’d be quite foolish to review this year’s best releases without including the revelation that is WHEELFALL. Aka the kind of band that kidnaps you, ties your cojones and drags you in the dust on miles. Their asimovian stoner/sludge is so well-thought that I wouldn’t mind listening to it 24/7 while trapped in a padded cell. Each listening of “Interzone” will bring out the band’s greatness, and every riff, every detail will back the stubborn listener you are into a corner, making you come closer to nervous breakdown, because you finally have no choice but to admit the genius that emerges from it. The band from Nancy didn’t choose the easiest path for their first record, and it undoubtedly deserved all the praises it has received. 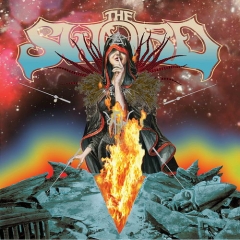 THE SWORD, a band who once found the perfect recipe, and has never let it go since then. From “Apocryphon” first notes, no doubt that we know who is behind it. Every key element is inside. But against all odds, boredom never sets in. There’s something dazzling in this new album of the texan band, something extremely brisk that goes beyond the music itself. Their music still tells a lot of cool stories, that’s a fact, the production is mesmerizing, that’s another fact. But we feel like the band was given a new lease of life after this long  and painful hiatus. From “The Veil Of Isis” to “The Hidden Masters” or “Seven Sisters”, their epic stoner goes more old school, more cut out for stadiums, even greater. Is it the sign of maturity ? Or consecration ? However, we’re still licking our lips… 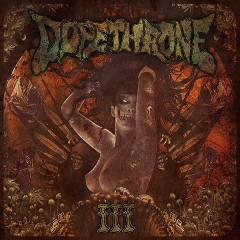 If there is one band in front of which we must absolutely bow, it’s DOPETHRONE. The band has been very creative in its basement in Montreal, they barely released this fantastic, what am I saying, BEYOND PERFECT “Dark Foil” record, and they’re back again. The fact that these guys are Weedeater’s and Electric Wizard’s hidden sons, is now a thing no one can ignore anymore. Dopethrone has a supernatural groove, a seductive devilish power combined to a chronic penchant to throw absinth on the flammes whenever they have the opportunity to do so. “III” arouses evil even more than its predecessor, and we would definitely delight ourselves with the least growl, the least cymbal impact, the least feedback produced by Vince and his friends.  As always, we feel like we were invited to join a voodoo ritual by the Canadians, and that they would do anything possible to drag us out of the depressing conformity that is so characteristic of our modern world. DOPETHRONE is already supreme, now they’re about to become legendary… 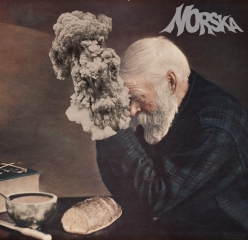 Under Portland’s grey, there is NORSKA. “Norska” means “norwegian”, to make you feel the cold wave that will hit your bones once you’d have plunged your ears into their first EP. Just pick Rwake, Kylesa and Ramesses. Gives them handfuls of meth, and let them kill each other (yes, I have weird ideas) : you’ll obtain NORSKA. Some animal, visceral and alienating sludge/doom. But hey, not only these fellas can make their amps growl in very primal way : they also create some lull moments, which reveals all their music intellectuality and carries away any person who would keep their ears open in the neighborhood. Just listen to “They Mostly Come At Night” and “Two Coins For The Ferry” to understand. “Norska” is an ode to this never-happening Apocalypse, a memento mori for the braves. Y’all shall check it out. 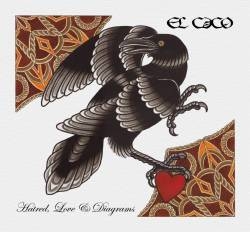 Having five records released makes of EL CACO one of the most kept secrets of the norwegian crown. But good things must be shared, and it is with great emotion that people will discover “Hatred, Love & Diagrams”, a heady, moving and breathtaking hard rock record. “Hatred, Love & Diagrams” will make your soul, your heart, and everything that quivers under your carcass. Drawing its sound in hard rock and melodic metal, while the songwriting is infectiously catchy, the groove and rhythm lock up the whole thing into a very strong and consistent whole. Beyond their undeniable talent for songwriting and production (from recording to mastering, it was all home-made), one of EL CACO’s most valuable assets is Øyvind Osa’s voice from Heaven : if your guts haven’t quivered yet, then it’s really clos to happen. Moreover, they’re as good live as on the record, so we’re looking forward to seeing them in France really soon… 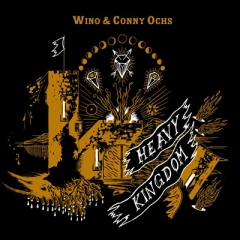 The sharp touch of a veteran ravaged by a wild doom existence, a young artist with a folk sensibility combined to a rebel soul… This album, which was born from a joint effort from Scott “Wino” Weinrich (Saint Vitus, The Obsessed) and Conny Ochs, is nothing but an acoustic boarding  by the book. Blues, folk, and even rock, “Heavy Kingdom” shows this intense and shamless encounter between two men who went through life the same way one would go through a storm on the high seas. Something you can barely survive. Both voices become one, guitars mingle with benevolence and determination. The chemistry is perfect, that’s why Wino and Conny don’t hesitate to pour a little bit of theirs souls into this dark and redemptive album. If those two were playing only electric, I bet you the Earth would shake. “What is a friend ? A single soul dwelling in two bodies”…