They appeared suddenly to the world, like devils popping out of some Pandora’s box crafted by the Gods of Rock’n’Roll. KVELERTAK is THE band who punched the metal & rock community in the face in 2011, with their first insanely warlike eponymous record, sounding as if their guitars and vocals were infused with the strength of the ancient berserks. They recreated the druids’ magic potion – the viking way. You have to listen to it to believe it. So I had two reasons to interview KVELERTAK : firstly, they are so intriguing that one needs to see through this band. Secondly, their second record is presently in the making, so it would have been a huge mistake not interviewing them right now. Their great frontman  ERLEND HJELVIK pleasantly answered my questions.

When I reviewed “Kvelertak”, I described it as “synonymous of mixing together all the bulls’ balls in the world with a freaking dose of endorphin”. If you had to describe your music to someone who doesn’t know anything about rock and metal, what metaphor would you use ?

Thanks for that description! I’ll just use a metaphor we had going a couple of years ago, “Burzum sucking Buzzcocks cock”, hehe !

It is obvious that KVELERTAK’s music is made with very different influences by a bunch of tenacious and enthusiastic men. But concretely, how has each one of you contributed to the recipe, so it would give this explosive result ?

Bjarte writes all the music, I write the lyrics, we hash out the songs in the rehearsal space and everybody brings their own touch to the table and come up with different stuff there. Seems to be working ! 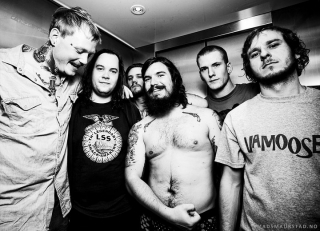 Correct me if I’m wrong: you guys started the band in 2006. Could you enlighten us about the turning points in KVELERTAK’s story that have helped you become the band you are today ?

Well, we spent the first years dicking around, practicing, making songs, trying to get a proper line-up together and playing as much live as possible.
After a while of doing that we got kinda good, we made some demos, got booked for a festival called By:larm based on those (kind of like the Norwegian SXSW) where we got of attention, met our booking agent, got booked for the Roskilde festival and Øya-festival the same year, so that’s when things started to roll. Then we recorded and released our album, got to join Converge on our first ever Euro-tour and then things really took off. I guess you know the rest…

Most part of your fans don’t speak a word of norwegian, so could you give us an insight into your lyrical thematics? If you had to tell one of your songs as a fireside story…

So far it’s been mostly old Nordic mythology and just bad-ass stuff in general like for instance devil worshipping. Next album won’t have any Nordic mythology in it though, got to keep it fresh!
I can tell you the story of “Fossegrim”, which is pretty weird story from norwegian folklore, I didn’t even make anything up except change Fossegrims Fiddle-skills to electric guitar skills. It’s kind of like the norwegian version of the devil in the crossroads.
The protagonist goes out in to the woods, to seek out Fossegrim in order to become awesome at playing guitar. Fossegrim who lives in a waterfall comes out and tells him has to steal a Fenalår [NDLR : leg of lamb] from his neighbour, in return Fossegrim will teach him. He does that, but on the way back he gets hungry so he takes a small bite of the leg and assumes Fossegrim won’t notice.
But he does, Fossegrim says that leg doesn’t have enough meat on it and then proceeds to get undressed and starts dancing. Our protagonist goes insane from watching him do this, since Fossegrim has a pretty crazy body. The end! 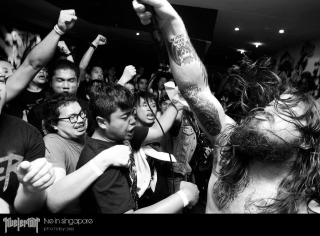 What was the weirdest or most surprising thing a fan told you about KVELERTAK ?

Hmm, can’t think of anything right now, I guess I’m hard to surprise ! But they do a lot of weird stuff, once we had a couple having front row sex during our show, another time a fan brought us homemade mead he had made for us, and during the norwegian butter crisis last winter a German fan was throwing sticks of butter at us on the stage, haha.

I know you’ve already started writing some material for the next record. How do you come up with the creative process as a band ? And what’s the current state of mind regarding this new album ?

We’re about halfway through writing songs now, we’re set to record with Kurt Ballou in August. It’s coming along great and we’re all excited to go back into the studio and finally present our fans with a new album.
It’s going to be pretty varied like the first album and it’s going to kick major ass. It’ll be at least as good as the first one!

Would you consider doing another collaboration with John Baizley for the artwork ?

Sure, as long as he’s not to busy with Baroness, haha !

I saw a video of one of your shows on Youtube (see below), it was in a small club in Singapore. It literally ended on the streets ! Does this kind of freestyle moments tend to happen a lot at your shows ?

Yes, it happens occasionally, it’s not unusual for the whole band to end up on the floor by the end of a show, assuming there’s room, otherwise we’d be crowdsurfing. The one in Singapore was definitely one of the funnier moments, when cultures collide ! After the show I even had to take photos with some old Singaporeans running a restaurant next door, haha !

Europeand dates have been planned for this summer in some pretty cool festivals, but when will we be able to see you again in smaller venues ?

Depends on where you are, I guess, the venues keep getting bigger pretty much for every tour, which is a good sign. On our last euro-tour it was mostly 400-1000 people capacity. Don’t know when the next one will be, maybe after the next album is out, if not before!

What do Kvelertak dudes do when they’re not playing an instrument, recording or touring ?

Personally I just relax and wait for the next show. I hang out with my girlfriend, watch tv, play video-games… I just started jogging though, I saw our next show was going to be like 70 minutes, so I figured I might as well try to get in shape, haha ! We’ll see if I’m able to keep it up once we start playing shows again.
I guess the other guys who don’t have jobs on the side does the same stuff as I do, Bjarte started to work in Caliban studio in Oslo where he records various bands and Marvin works as a shop-guy at Invictus tattoo studio in the same city. 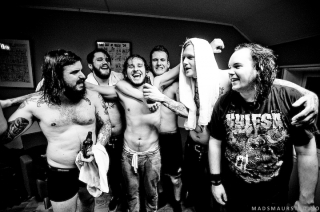 What are the bands and albums you like to listen to at the moment ?

Right now I’m listening a lot to the new Torche and Dødsengel. Torche is amazingly catchy and Dødsengel is just a crazy and nasty black metal band.

Bonus question : if a promoter was giving you the chance to be part of a lineup that would include a few of your favorite artists (dead or alive), which bands would you pick ?

Check KVELERTAK’s badass music on their Facebook and MySpace