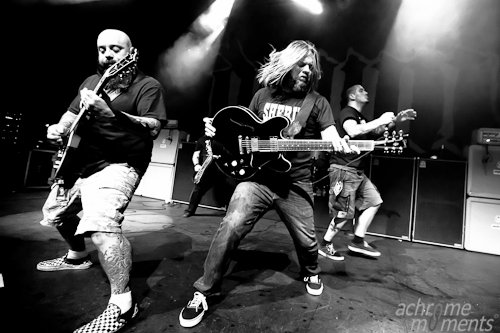 DOWN aka Nawlins’ 5 bros touring on the Latin-American soil for the first time in 15 years : it might have felt beyond awesome for them as well as for their excited fans over there…
One good news can’t be without another : their performance at Sao Paulo’s SWU Music & Arts Festival was entirely filmed in HD !

The only HD footage we got in 2011 was the Sweden Rock Festival where Phil Anselmo had a very bad sorethroat (which didn’t spoil their fucking kickass performance), so we’re pretty grateful to get another DOWN shot in this time of pre-release excitement !

Phil seems to be vocally burnt out, but his frontman aptitudes isn’t even compromised !

SLOW SOUTHERN STEEL : here’s the metal documentary you’ve all been waiting for !