Spring is here, it’s time for “Jason…The Dragon” to come out of hibernation, and I can tell you the beast is anything but pleased ! WEEDEATER is the typical underground sludge band from the Southern States : dirty, pissed and neurotic, carrying an oppressive, primitive, dissenting music.

So what about the weed eaters’ third album ? Their music remains uncorrupted. This smoky basement atmosphere typical of this genre is at the center of everything, for the rest let do the fuzzy to death distorted guitars, the subtle swing that envelops it all, and of course the insane singing of Dixie Collins aka the dude whose eyeballs roll blank thirty times a gig.

Contrary to its predecessors, “Jason…The Dragon” is to be listened like we would read a fantasy book and takes us on a journey right into dark catacombs and mystic lands, on a sleepy war territory… An unexpected pause at the nearest tavern is set with the bizarre Palm and Opium, only made of a folk guitar and under-acid whisperings.

The whole record is perfectly heavy and way less chaotic than a “And Justice For Y’All” for example. This maturity allows the listener to get intoxicated and entranced under the opiate effects of WEEDEATER’s music (don’t see any incitement to illicit products consuming, dear readers). The very groovy and stoner Homecoming acts like a refreshing note : “don’t forget we also can swing, goddammit !”. At the end of Whiskey Creek, 3rd and last acoustic interlude this time recorded under the rain, we definitely know these guys are completely wrecked…yet inspired. Yes, this is a ninspired band about whom we don’t hear much about in the big world : but if that is the price to pay to hear such cool albums, then so be it ! 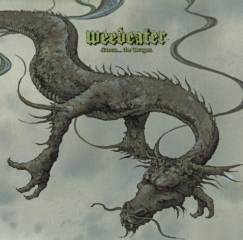