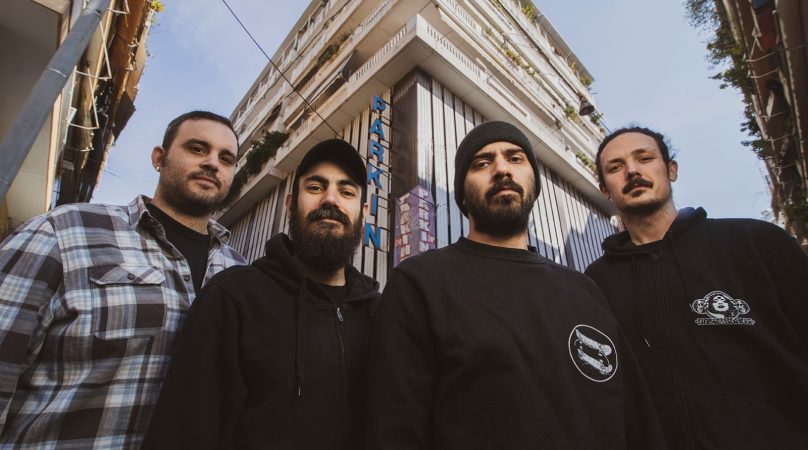 Greece is not only about the mythology that relegates Hammer horror to the rank of children’s tales, nor olive oil, white houses, and complicated diplomatic relations. It’s also the cradle of a nice bunch of heavy bands like 1000mods, the next generation of thunderous stoner rockers to which the 70’s doom and heavy influences of those four friends coming from the small village of Chiliomodi largely benefit. We caught up with their drum master Labros in Belgium.

According to you, what defines heavy music?

Low tuning, loud gigs and everything that makes your body vibrate when listening to live music. It has of course also something to do with the mind, but I think that feeling your body and organs vibrating is the best thing to enjoy live heavy music.

What are the pre-Sabbath bands that have had an influence on you?

I would say Pink Floyd, Led Zeppelin, Blue Cheer for sure… All these bands that were on the heavy rock side, and all the late 60s bands that were both psychedelic and kinda heavy. The Who as well, of course, and all those who were experimenting through loud gigs and with a lot of gear on stage

Today, do you feel more thrilled by contemporary bands or old school ones?

To be honest, during the pandemic and especially the lockdowns, I didn’t listen much to new music. I stayed into my comfort zone with lots of 70s music but also 90s stuff like early days stoner rock. I still managed to listen to the last Tool album. During the quarantine, I listened to it like 50 times or so and the more I listened, the more I liked it.

What are your non-musical sources of inspiration?

I enjoy cinema very very much. I also enjoy discussing social topics with people, how the whole economy affects our way of living. The last decade has been the toughest for our generation, especially in Greece after 2008. We were really young, like in our 20s, and it was really difficult to be in this kind of situation. I also like to pick information and knowledge about what is happening in technology and stuff that can make human nature go a little bit further. I’m not talking about the new iPhone you know, I’m talking about stuff that can make life a little bit easier and drive our specie a little bit further. And also maybe a little book reading, but it’s quite difficult for me to read lots of books.

Do you have writing tricks for your drumming parts?

Most of the time, I really try to accompany the tunes and play for the music, instead of trying to play things that seem very fancy. I prefer to play drums that support the music, rather than being the one that plays drums just because I like it.

“What makes Greece so special is that musical scenes are not compartimentalized. You can see kids at a techno party one day, and at our show the next day.”

Two years ago, I went to Athens for the Up The Hammers festival and I was stunned to see how the youth had this incredible knowledge about super old heavy stuff. I was also amazed to see two stoner-only bars in the city center, where the playlists were very old school. What is special about the Greek scene?

What makes Greece so special is that musical scenes are not compartmentalized. You can see kids at a techno party one day, and at our show the next day. There are so many people everywhere in bars and music venues, because people who listen to rock music also listen to other stuff and inversely, we are not closed-minded. But still, it’s not a mainstream kind of thing. There are many people, but it stays underground.

Do you have a touring story for us?

(Laughs) I have many of them! We have been to many places around the world and we have played in really really weird ones. The last place that was unbelievable was a brewery in Tasmania. When you land in Tasmania, they don’t search for drugs or stuff, they check if you have any seeds or fruits with you because they don’t want you to modify the ecosystem. We had no idea what to expect from this country, but the place was packed and people went fucking crazy. It was like a dream to be this far away from home and play a gig.

Last one is our traditional white card where you can say anything you want.

I’m gonna make a wish: I wish that we’ll never play again in our studio with cameras for people staying at home. I wish things will be normal, like what happens today here at Desertfest. I wish that every band can go on tour again and have the time of their life again without being afraid all the time. This is my wish for 2022.