We asked DOMKRAFT their recipe for a perfect album. 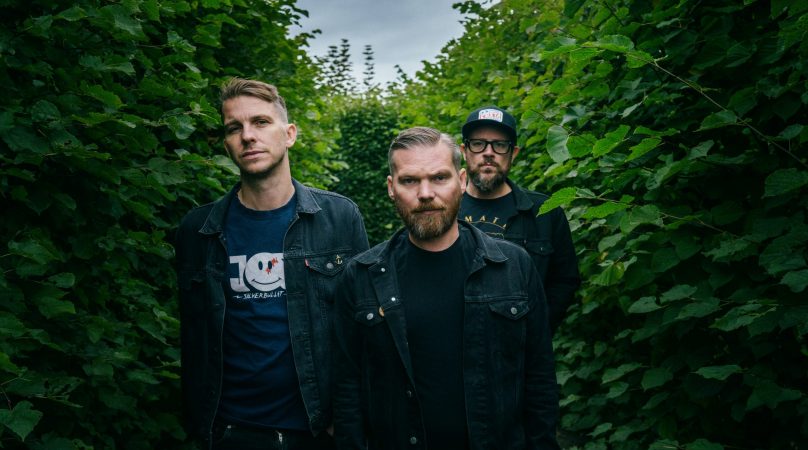 Is releasing the best post-doom album of 2021 enough of a reason to be interviewed? Yes it is! There is so much to say about DOMKRAFT‘ new album “Seeds” on Magnetic Eye Records: not only the Swedish trio stands out through a strong sonic identity and refusal to obey the genre’s codes, but they also offered a true masterclass of songwriting, production, track listing and album progression. This is why we had to investigate and ask the band about their final recipe. Here’s what bassist and vocalist Martin Wegeland had to say.

First of all, I have to ask. Did any of you turn blind from looking for too long at the “Seeds” artwork? Joke aside, it’s absolutely stunning and a crazy idea. How did you come up with this concept and how important is the visual side of things to Domkraft?

No eye casualties that we know of this far. But, yeah, there’s a lot going on there. The entire concept came from our constant art guy Björn Atldax, who wanted to do something vivid and mind-bending in 3D. And we always give him free hands to do what he wants to do – he knows us well and gets what we like, even though he is not into heavy music himself. And I think the visual aspect is important, it adds an additional layer to the music.

I’ve kept listening to “Seeds” since it went out, and one thing one can’t deny is how massive the sound is. How did you achieve this? Would you say the songwriting was key in injecting more heaviness to your sound, or is the recording process just as important?

Cheers. It’s actually a combination of both. We worked a lot with getting the groove going on each track, allowing each instrument to do its own thing, rather than just have some constant pummeling going on. And to make that work in full, we went for a bigger, richer sound when recording also. More headroom, more space and just a wide, heavy sound overall.

It is always refreshing to see bands deliver their own take on such codified genres as Doom or Sludge. Do you feel like you fit into this scene? How do you usually describe Domkraft’s music?

We usually just say that we play heavy, slightly psychedelic rock. It may not be the most accurate description but makes sense since there, of course, are elements of what people use to label as doom, stoner, sludge and space rock – but not strictly one or two of those. It’s all just a big mess of all that, and more.

Bands often claim they don’t care about labeling their music, yet, in the rock and metal industry, we know it’s hard to completely avoid pigeonholing. How do you feel about the scene a band belongs and identifies to, should the music outpower everything else?

I completely get why these genre descriptions are necessary sometimes, you need something to help with navigating through the constant stream of new music and bands. And I have full respect for bands who go all-in in a specific genre, but I don’t think we could ever do that ourselves. Our influences are so diverse that the outcome just has to be colored by that.

You recorded “Seeds” within three or four days. Did you purposedly record within a short timeframe in order to capture the raw takes, or did it just happen this way?

We always record that way. All of us in a room, no click track, and then just “press rec on tape”, basically. And that is the only way we could do it. There is always an element of improvisation left when we hit the studio, and in order to bring that home, we have to get the vibe going by doing it together. The vibe is always more important than perfection. The outcome has to feel vibrant and alive. Plus, it saves time and money…

“Audiodome” is a perfect album finale as well as its longest track. It starts with this faster riff, with an almost mid-tempo punk hardcore feel to it. It is rather uncommon for a high-tempo track to be the longest on an album. How did you come up with such an idea? Did you plan for it to be this long final masterpiece right from the get-go?

I think it came up the usual way, me and Martin had one riff each that we combined, and Anders had a solid beat. Then we just arranged it in a slightly different way, as there was a kind of urgent feel to both riffs. As soon as we had written the foundations of that track, we knew it would have to either open or close the album. And when we added the melodic theme that finishes off both the faster and slower parts, it was clear that it had to be last. To leave people with something at least vaguely hummable, ha ha.

Domkraft has been a very prolific band since the beginning. Do you have a secret formula, or does each song come from a different place, with a different method and approach?

I think we do have some kind of method, but I am not really sure what it is. I guess the main thing is that me and Martin have been playing together for a very long time in different bands, so we kind of know what we like and how to work with those ideas together by now. It almost always starts off with a pretty minimalistic riff or a beat and then we jam and mold that into something. Then again, some ideas just show up from strangest places and you can’t even remember where some songs originated. I guess having an open mind and full focus while in the practice space together might be a partial answer.

In the stoner and doom scene, vocals are usually seen as an instrument, yet, lyrics still occupy a special place in the listener’s heart. How do you deal with vocals in general? Do they come at the end of the process, and carry more weight than the strictly instrumental parts?

They are basically just an instrument for us also. Usually, the vocal lines start to take shape when we’re arranging or jamming on the tracks. The actual words come way later – and solely depend on the vibe of the track. It all has to work together.

Since we are finally able to attend shows again and doom and sludgy acts are known for using crazy, loud and rare rigs, is there one piece of gear you think is necessary for Domkraft to be Domkraft? An item you like to brag about or could not imagine touring or recording without?

Ha! This is actually a question for the other Martin, he’s the gear head of the band. He needs quite a lot of gear to make his sound full justice, but if I have to pick a single pedal that we both really depend upon, it’s the wah pedal. We need pretty specific Cry Baby models for both guitar and bass, with auto-start and a really broad sweep. Most other pedals can be replaced, but those are our comfy blankets. And, yeah, Martin would probably say the battered, vintage Fender Jaguar he picked up last year. That guitar has seen things.

KAVRILA delivers the most brutal doom-punk gift ever with “Mor”.