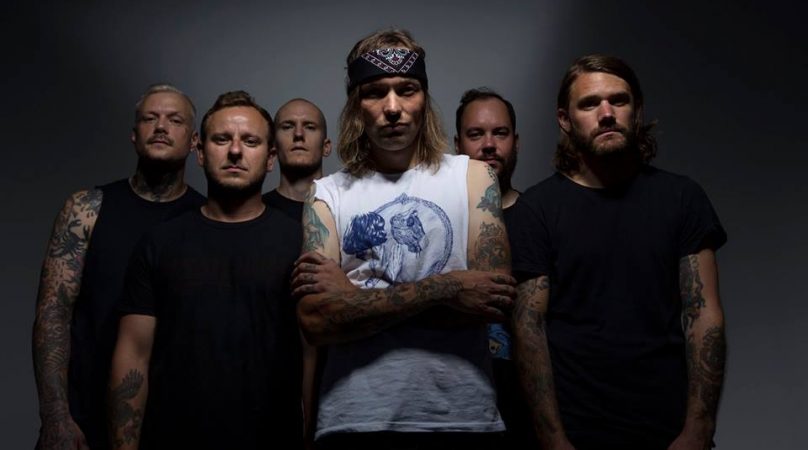 THC has a long history with KVELERTAK. We covered every piece of music the Stavanger six piece has produced, from the day they changed the face of heavy metal with their meteoric eponymous debut in 2010, until they established themselves as outright rock’n’roll warlords-slash-stage gods for good with ‘Nattersferd’ in 2016 — it has felt like ages to us.  We witnessed every single of their French appearances too. From that brutal-as-fuck and sweaty club show in Paris back in 2013, to each one of their late-night yet highly revered Hellfest shows. And we’ve come to one conclusion: there are very few metal bands in this world who can deliver such genuinely punk-driven, fist-pumping and enthusiastic shows than KVELERTAK do. Blending black metal, hardcore and even your dad’s classic rock, they’ve crafted their very own brand of Heavy and built the solidest fanbase (even though we bet that only 1% of the latter get 99% of those viking chants). What marketers call a ‘success story’ came along the usual mishap, when almighty, nicely potbellied frontman Erlend Hjelvik left the band a few months ago. How could the six-headed hydra survive without their charismatic leader? Who could take up the gauntlet to keep delivering the goods, backed by one of the most powerful riff machines of the ’00s? It seems that Ivar Nikolaisen was up to the job and took over the throne as Crowdsurfer Supreme — something we came to see with our own eyes in Paris last month. We met guitarist Maciek Ofstad and bassist Marvin Nygaard to discuss it all, from ruling worldwide arenas to hating aubergine on pizzas. (Interview run by Beeho & Sylvain Golvet)

Your singer Erlend Hjlevik recently left the band to meet new horizons. Was this something you expected? How did you deal with his departure and the search of a new vocalist?

Marvin Nygaard (bass): We knew for a year before he quit, that it was going to happen. Erlend tried to quit at some point before that.

Maciek Ofstad (guitar): Ivar was the first name that popped into our minds. You know, we were on that Metallica tour and it was a pretty intense year, and as soon as it was finished, it came as a natural point where could actually part ways. We got Ivar in and could go on and do what the band wanted to do. It’s worked out really well to have fresh blood and positive vibes, also Ivar contributes to ideas and lyrics so it’s really cool to have one more guy who brings music.

Ivar seems to bring a whole new energy on stage. Yet it must have been something, to walk in Erlend’s footsteps!

Maciek: Ivar’s first gig was a festival, a homecoming show in Norway, so it was easy. We kept it secret until we got on stage and it turnt out really cool!

Marvin: It’s never been weird. Well, it’s weird because we’re a ten year old band, and we’ve had the same singer for so many years, so it’s like you’re in bed with someone else (laughs). But we’ve never been this consistent. He has lifted the band to the next level, without a doubt.

Maciek: It feels so natural, and hopefully it worked out for everyone!

And the crowd, I guess?

Maciek: Yeah! The response has been really good. Ivar has this natural aura… He could be in the worst band in the world, and it still would be a really fucking cool band. He just has that energy.

“Ivar has lifted the band to the next level without a doubt.”

Since you started, you’ve been supporting the biggest bands: Metallica, Ghost, Mastodon… Yet it seems that you got popular pretty quickly in Norway despite all that. What’s most important to you: being famous at home or considered as a rising act on the international scene?

Marvin: We don’t have any specific ambitions. We do stuff we find cool. And the Metallica tour is a thing you can’t say no to. And if stuff comes along, well… All we want is to get better and better, and record good albums. We’ve been on a level now that is pretty comfortable.

Is it always fun to be a support act for a band like Metallica?

Maciek: That tour was so well organized, the easiest tour you can do. The band and crew were really nice to us, I loved it. It really made a difference for us. We learnt a lot and you can see that our band grew from it.

Marvin: It’s a total different way of touring. It’s so much in the hands of both Metallica and their fans. You’re just along for the ride, you know?

One of the most brutal performances we attended was that show at Glazart in Paris back in 2013. People were literally crowdsurfing under the roof! Don’t you ever miss small, sweaty clubs?

Maciek: Last year, we decided to go back to all the clubs we used to play in Norway… as well as doing side shows during the Metallica tour. On a Monday, you’re in this huge arena, and on Tuesday you play a side show and play for 500 people, and then back to 20,000… (smiling) We get a bit of both!

“We don’t have any specific ambitions. All we want is to get better and better, and record good albums.” “Nattersferd” had this more classic heavy metal vibe. What can we expect with the upcoming one? Have you started writing yet?

Maciek: We started working on the new material. It’s still way too early to say how it’s going to feel.

Marvin: Every album we’ve made has been a step towards something new, and we won’t be repeating ourselves. Hopefully, somewhere between ‘Nattersferd’ and what we’ve done before. Ivar is more of a rock’n’roll singer, he uses his voice differently than Erlend, so he should bring something new to our sound.

Your first two records were both recorded and produced by Kurt Ballou. What made you change your habits and record “Nattersferd” at home and live? It’s also the first album you guys produce entirely!

Maciek: We wanted a record that sounds 100% like we do on stage. With a live setting comes a whole different feel, so it just felt natural to change things a bit. This is also why Arik Roper took care of our artwork instead of John Baizley.

Any hint regarding the producer and studio involved for the next album?

I read somewhere that Bjarte (Lund Rolland, guitarist) used to come up with all the songs, then on your last record ‘Nattersferd’, you all contributed to the songs on the same level.

Maciek: For this one, we were in rehearsal space for months, coming up with ideas and baking songs together. A different process that can also be costly — but after four days of shit, a song pops out.

“After four days of shit in rehearsal space, a song pops out.” Now for the lighter questions… You’re now expert road dogs who’ve been touring a lot on a worldwide level. Aside from home, what is the coolest places you’ve been to?

Marvin: Paris and Barcelona would be two favorites in Europe.

Maciek: Goddamn, there are so many! Portland, Austin are great. Japan, Australia… and Singapour! That show was insane. Also, last year with Metallica we played a side show somewhere in Switzerland. We were parked next to this huge river where people were swimming down the river at super speed (laughs). We had this great park and catering, and we swam all day…

Marvin: Our sound guy almost drown in that river!

Maciek: Sevilla is also one of my new favorite place. But yeah, everywhere is nice. It’s easy to say what’s worst!

So what’s your worst memory on tour?

Maciek: My worst memory was on my birthday in Italy. The venue changed on show day but the promoter didn’t tell anyone. We played with Bison BC and Coliseum this huge fucking room, and there were three people there and it was so cold! And they put aubergines on the pizza… Horrible day. (laughs)

Marvin: Our car accident in Norway. Involves a jealous boyfriend and three of us in the car. He broke a window to get into the car, then he drove out of the road. It sounds crazier than it was, but it was pretty intense at 6 in the morning. No one got injured happily.

Last but not least: if you had the chance to jam with one of your music heroes — dead or alive — who would it be and why?

Marvin: That’s a hard question. I don’t think I would like to jam with my music heroes… ‘Ok play a riff’, ‘Hmmm, no?’ (laughs). I’m in my favorite band.

Maciek: We’re doing festivals this summer, then we will concentrate on the new record. There will be some news very soon, so keep your eyes open!

Thanks to Maciek and Marvin for the quality time at Casino de Paris, and Kim Paulsen for arranging this interview.