Isaiah Mitchell of EARTHLESS: “The power of live music is life-changing.” 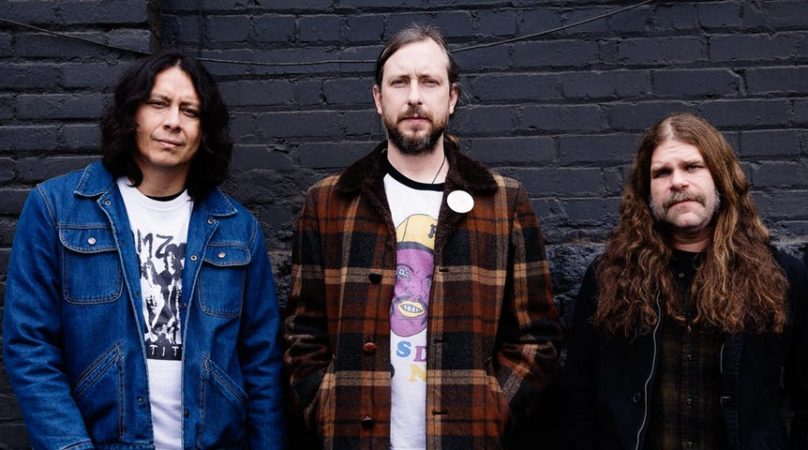 EARTHLESS once again blown us away with their latest album Black Heaven, a tour de force that shakes up our certitudes by taking their relentless jamming down a notch and emphasizing their songwriting and studio work. We had a few interrogations pending about the band’s new approach. In anticipation of their upcoming spring European tour and while spinning their new “Live From The West” outing, we recently caught up with the legendary trio’s riffmaster Isaiah Mitchell. (PHOTO: Atiba Jefferson)

After the release of ‘Rhythms From a Cosmic Sky’ in 2007, Mario Rubalcaba (drums) declared that the songwriting was limited by the twenty-minute length of a LP side. Two records later, your songs clock in at around nine minutes each, for forty minutes total. Were you in a rush when recording the new album?

Isaiah Mitchell (guitar, vocals): We weren’t in a rush really, but we were writing more vigorously. It turned out that strongest songs that we had for the studio were mostly songs with vocals. Still after all these years, we’re still limited by the 20-minute length of an LP!

Your new album ‘Black Heave’ is the most straightforward record EARTHLESS has ever put out — as if you allocated less time for atmosphere build-ups and went straight ahead. Also, the record seems to be filled with more riff and melodic ideas. How did the songwriting and recording go?

Isaiah: For ‘Black Heaven’, a lot of the writing was done individually because I no longer live in San Diego. Mike (Eginton, bass) and Mario (Rubalcaba, drums) would write the bulk of a song, I brought in a few others and we wrote a few together that were written during the rehearsals for the recording of the album. For the first time with Earthless, I made demos at home before I showed the guys the songs, so I was able to experiment with overdubs and try out what worked musically and thus have the “big picture” more fully realized for the guys to hear. This saved a lot of time experimenting in the studio. We recorded to Pro Tools so we had infinite tracks to work with too. That gave us the luxury to try anything that popped in our heads at Rancho de la Luna. Dave (Catching) had input here and there, so that was a welcome element in recording Black Heaven.

“We loved that we’ve been primarily an instrumental band (…) but we wanted to do something totally different for ‘Black Heaven’ and throw everyone and ourselves for a loop, so we did!”

Your voice is more predominant on this new album, which reminds me of your other band Golden Void, especially on the laid-back and moody « Sudden End ». Has this side-project given you more confidence when it comes vocals and pushed you to bring them to the front?

Isaiah: Mike and Mario have always known I can sing, so confidence in my ability hasn’t been the thing holding us back from adding vocals. We loved that we’ve been primarily an instrumental band but we’ve been teasing songs with vocals on our albums for over 10 years now. We wanted to do something totally different for ‘Black Heaven’ and throw everyone and ourselves for a loop, so we did!

Recording at Rancho de la Luna with Dave Catching must have been quite an experience. I imagine that the place must be pretty inspiring… and jam-inducing.

Isaiah: Yeah, Rancho and Dave are amazing! Such a creative space to work in, and Dave is the nicest guy to be around so it was very relaxing and enjoyable to make a record there. And you’re in Joshua Tree, so that’s an amazing trifecta of goodness pushing you along.

“Volt Rush” is a fine piece of rock’n’roll that reminds me of The Atomic Bitchwax’ relentless riffing. Do you know them and do you enjoy their music?

Isaiah: Thanks, glad you dig it. I love those guys. Great humans. We toured once together and had a great time. Just saw them again on our last European tour and was great catching up, Chris and Bob are one of my favorite rhythm sections. And I love Finn’s guitar playing. Bummed he’s not playing with them anymore, but Garrett will keep them amazing.

I read an interview where you mentioned some of your favorite vocalists — Townes Van Zandt, Sam Cooke, Phil Linnott. Do you intend to experiment more acoustic or soulful things in the near future?

Isaiah: I’m not sure what will do for our next record. We’re all way into the idea of doing weird acoustic things if they feel natural. We don’t want to lose our personality as a band. It’s fun to do different things but right now I can’t see us doing a R&B-type super mellow the whole way through. Maybe it’ll be amazing if we do that?! We’ll see…

“On ‘Black Heaven’ it sounds like we’re in the studio, whereas our previous records sound more live to me. It was fun to do something different this time.”

Your label Nuclear Blast Records is known for being a leader in rock and metal, and we sometimes noticed a slight change in the sound of newly signed bands – I’m thinking of Witchcraft, Graveyard, Blues Pills – or a more market-based approach. Did the label have their say regarding the making of the album? ‘Black Heaven’ sounds more refined and less raw than before, yet it also certainly doesn’t sound any awkward or over-produced.

Isaiah: Monte (Conner, the head of A&R at Nuclear Blast) let us make the record we wanted to make, so they really didn’t have any say in what we wanted the album to say. Promotion-wise, I’d say they had a big hand of course, but creatively he let us be ourselves. I don’t think we’d be able to work with anyone who tried to steer our ship. I agree it does sound different than our other records. I think it’s because we recorded to Pro Tools this time, and we had an infinite amounts of tracks we could add to each song. We usually record to tape and have 8, 16 or 24 tracks to work with so we took advantage of the endless possibilities that Pro Tools provided. I’m very happy with the end result, but I do look forward to working within analog constraints again. On ‘Black Heaven’ it sounds like we’re in the studio whereas our previous records sound more live. But it was fun to do something different this time.

I assume that the sound shift on ‘Black Heaven’ is less predominant on stage. Do you keep pushing forward the jammy side of your music to bring the crowd’s mind elsewhere?

Isaiah: Yeah, our live show hasn’t changed in approach. We just throw in a couple of vocal songs in the set, but it’s still primarily instrumental and there’s lots of room for improv. People need not to worry, if they are indeed worried!

A lot of young people are attending your shows, as well as listening to those bands into the late-60’s early-70’s vibe. How do you think they connect with a music that was created 50 years ago by baby boomers?

Isaiah: I think that due to the power of it, they connect immensely without a stutter. A good live rock show with the lights and a loud band is captivating. For me it’s hard not to get sucked in. If I listen to a record from a band and don’t really dig it, then I go see them live and if they absolutely blow me away, I’ll end up loving the record. The power of live music is life changing. It’s changed my life many times and still does. I think other people feel the same. People are smart. They can smell bullshit a mile away. I’m grateful that we have fresh, genuine, powerful, kick ass rock ‘n roll still to this day.

“Guitar sales might be slowing down a little but that doesn’t mean people
aren’t picking up guitars for the first time.”

To end this interview: about a year ago, the Washington Post published an article about the near end of electric guitar, on the sole basis of Fender or Gibson’s decreasing sales. They also stated that this generation is lacking guitar heroes. What are your thoughts?

Isaiah: If you’re going off of the shitty popular music they shove down our throats then yeah, there’s not many guitar players out their to inspire the kids. Hell there’s not many guitar players! But if you dig deeper and look across genres you’ll find Dave Rawlings, Neil Young, Matt Pike, Brent Hinds, Dave Gilmour, Scott Law, Barry Sless, Neil Casal, Jim Thomas, Mike Campbell… Tons of guitar players out there. Guitar sales might be slowing down a little but that doesn’t mean people aren’t picking up guitars for the first time. It will never go out of fashion, to look cool in your bedroom playing air guitar or real guitar in front of the mirror. The world will always have that going on. Everything comes and goes in waves. Just look at history. I wouldn’t pay attention to articles like that. Just go see a live show and see for yourself.

In-depth with BRANT BJORK: “Every record I’ve ever made is political.”