Get under influence with Poland’s sons of doom DOPELORD. 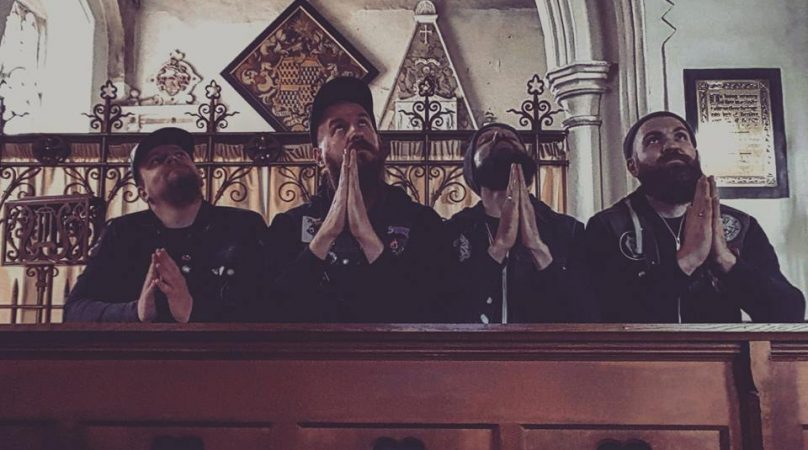 You’ve had a lot of praise on your new album “Children Of The Haze”, were you expecting such a positive feedback ?

Piotr (bass & vocals): I don’t think we’d expected anything, we wanted to be as good as possible, but the reviews are always nice things, even if we don’t do things to get good reviews or for others. It was very pleasant to read so many good reviews.

I’ve been listening to the record endlessly since it’s out, biggest stoner/doom slap in the face in a while…

Piotr: You need to listen to more recent good bands too, man! It’s very nice from you, thanks man.

You’re not really active on social medias and give very scarce info about your influences or lyrics.

Piotr: When we’re on tour, there are a lot of information to tell people where we play, etc. So that’s the way we use social media. But you’ll find our influences in every interview, it’s quite obvious what influences us (just when one of them decides to roll a couple of spliffs, to make sure I understand what influences them…).

So what elements do you inject into the music?

Piotr: Just everyday life, experiences you get from living.

Tomasz (drums): Electric Wizard were so tired of questions about old horror shitty movies, they put online a subpage with the whole list of them, it’s like “you want to talk about this? Well here they are, watch all of them”. But it’s just ridiculous horror!

I must say that I only recently noticed that the Polish scene was blooming! We hear a lot about the Swedish, Greek, French and Italian scenes, yet Poland has a lot to bring on the table, with bands like you, Belzebong, Sunnata, Weedpecker…

Major Kong, of course, who will play here in june.

Piotr: It’s a very good time for music in Poland, not only for stoner and doom but also metal, black metal, there are many good bands out right now. It’s pretty strange, because in the 90’s only Vader and Behemoth were famous outside of Poland. So all the other Polish bands who wanted to do an international career made the same thing, thinking that they would gain attention abroad, but they were ten years late and had nothing new to offer. However, the whole Polish music is getting attention now, even “avant-pop” is getting popular.

Would you like to recommend any other Polish band(s) to our readers?

Piotr: You dig Weedpecker and Major Kong, so here is the former member of Weedpecker (pointing at Grzegorz). Outside stoner, you can try nearly everything in post-metal. THAW, who played at Roadburn this year, are very interesting. Sons of Nibiru is putting out a new record!
Grzegrorz (guitar): Spaceslug too.

Do you know each other and how do you interact with those bands?

Grzegrorz: We once share our rehearsal room with Belzebong, Weedpecker and Major Kong, it was a real struggle to play in there with everybody around!
Piotr: We know each other quite well and try to help each other as much as we can.

Piotr: So thank you, it was YOU! It’s all your fault if we had to drive 10 hours! We won’t forget that mate…

It’s just crazy and I realize how lucky we are to see you tonight. I assume you all have day jobs. Would you like to prioritize the band over day jobs at some point?

P/G: Some of us have jobs – a complete strange stuff for our drummer, he doesn’t understand the concept of “job” – some of us are looking for one, but it’s always about balancing between working and the band.

Is it complicated for you to play beyond the Polish or German frontiers?

P: It’s difficult to book a whole tour, not gigs. From the beginning we get attention and get mails from promoters to book gigs and when I’m talking to other bands, it appears that we’re very lucky. The music we play, this genre being more popular, we don’t have problems. Or maybe we’re THAT good! Seriously, it’s difficult when booking a whole tour, because you have to say to your boss “I won’t be there for the next 2 ou three weeks, see ya”. But we manage to do it!

How do you feel about the venues on this tour ?

P: There are different points of view. We’re obviously not that kind of band playing big clubs or first class venues, sometimes we have to play in a basement, a record store like recently, sometimes it’s a bar with no one in there… Ups and downs, but most of the proper venues are really good so we’re ok with that.

I’m asking that, because sometimes, French people don’t realize how lucky we are to have promoters hosting bands in such good conditions.

P: It’s not a matter of country, there are good and worst venues in every country. It depends on the promoter and the people running the venue. If the people know what’s important, then everything is ok. There are lot of stuff to consider: the stage, are the PA ok, is there enough room for the drum kit and those stuff, is the least a venue can do. But sometimes it not that good, as it can happen in Poland or Germany.

So far what do you think of our venue, La Scène Michelet?

Together: It’s very nice! There’s also the backstage part, man, and it’s so good! People are cool, the food is good…
T: …And the cheese! Hmm, I can’t get enough cheese!
G/P: You are witnessing the only man on earth made of liquid cheese. He could live only with cheese!
T: If the venue is run by musicians, then everything should be ok. Do you know Machete, who are opening tonight? They’re a band from Nantes who played at Hellfest on the Sunday two years ago… Talking about that, you must have heard of the festival before. Any plans to play there?

P: Man, it’s not that easy. We’d really love to play Hellfest, beautiful festival with incredible bands on every style.
T: If we could, we’d play Brutal Assault, Hellfest, Maryland Deathfest, Stoner Doom Festival, everything, everywhere!
P: Unfortunately, it doesn’t work that way. But I think when you really want something and work hard enough to get it, you can do it!

Last word you would like say to our readers ?

G : We’re happy to be here for our first gig in France.
T : KEEP THE CHEESE WORK! I’m getting so fat here.

Big thanks to Piotr, Grzegorz et Tomasz for taking the time to do the interview ! In-depth with BRANT BJORK: “Every record I’ve ever made is political.”