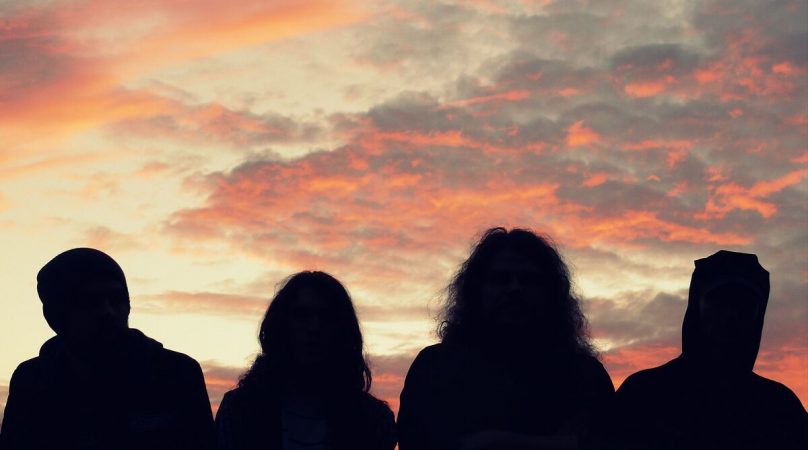 The beginning of 2018 was marked by the release of “III”, the well-acclaimed new album from WEEDPECKER. We’re still mind-blown by this solar record, and get lost delightfully in its heady wilderness (read our review here). The Polish have opened paths to kaleidoscopic panoramas, showing an acute sense for songwriting, never occluding their spectacular patterns with too ostentatious bursts of heaviness, while adding a myriad of perfectly mastered details. On our living room’s flying carpet, each new listening provides a different trip. This new album’s lushness has turnt Weedpecker into one of the spearheads of the new heavy psych scene (and comparisons to Elder are definitely too simplistic). We wanted to know more about this piece of goldsmithery, and the band’s answers prove a disconcerting ability – at most helped with an abundant pharmacopeia – to skyrocket the listener in the cosmos… Indeed a highly talented outfit we need to keep an eye on.

Your third album sets the bar pretty high in terms of songwriting. The unpredictable side of your songs could lead us to think that the five tracks are in fact jams, if it weren’t for the exquisite arrangements. How did you proceed in the studio? Are these live takes? Do you ever improvise while recording your songs?

Bartek (guitar & vocals): Well, on this album we were mostly writing patterns, but sometimes when we were bored working on something, we were just jamming out to see what happens. There are some jams on the record but not that many. In studio we recorded each instrument separately. I like to add tracks slowly and to have a moment to think what would fit. Recording process is partly improvised because it’s always nice to try to play something in a different way and see if it works.

Many like to compare you to Elder, yet to me, your sound is more reminiscent of the new wave of psychedelia initiated by bands such as Temples and Tame Impala. Do you have the same thirst for vintage vibes than more rock ñ and sometimes pop ñ bands like the aforementioned?

Yeah, I really dig this whole neo psychedelia scene. There are really tons of great bands in this genre that are worth a listen. Definitely we are inspired by them but we still want to combine this psych vibe with heavy riffs. It’s not an easy task and we are still looking for our ways of expression but I think we’re getting closer and closer with each record.

How did you manage to inject such a genuine 60’s sounding psychedelia into your record while keeping it eminently contemporary and balanced?

I don’t know man. It’s just a combination of things we listen to that gets us inspired. What you listen to makes a music that plays in your head and then you can turn it into songs.

Do you intend to stand out of the overcrowded psychedelic scene? What are your thoughts on the latter?

I think that we just want to play what we feel. I dont want to stand out or stand in of any scene. It just doesn’t make sense. Your evolution in terms of arrangements and build-ups on this album is truly mind-blowing. How did you come up with such a precise and finely-crafted sound?

Tons of weed, man. No, but seriously I have no idea. I don’t see our sound as precise and finely-crafted. We are still learning how to produce the record. There are still many mistakes that we made during this session, which is good in the end because we know what we need to work on.

You are now signed on Stickman Records, and recorded « III » at Nebula Studios. Is the overall artistic direction of “III” inherent to these choices? Maybe they gave you the opportunity to access more specific instruments and recording gear?

Actually it isn’t. We wrote the material, ended up in Nebula studio because it was in Warsaw where we live, and then after we recorded it, Nick DiSalvo from Elder came to our gig in Berlin and said that he could show the material to his bosses in Stickman. He did and they liked it and that’s how we got in the label.

Your artwork is stunning, this is what actually made me want to push play. Can you tell us more about it?

Yeah, Piotrek didn’t want to have another painting. He thought that it would be nice to have some nice picture with some effects. Maciej Kamuda just came up with a perfect solution. I didn’t like it at first, because it looks almost the same like the “Innerspeaker” cover but in the end it’s all about music, so I didn’t stand for changing it. Now I think it’s nice and really fits the vibe.

For creativity purposes, are you more the Orange Bud or Purple Haze kind?

Only AK-47 and white widdow, dawg.

Is must be hard to render such luxurious, intricate and meticulous songs on stage. Is this something you had in mind when you recorded it?

Well, it’s actually not that hard. Our band team changed recently cause Mroku and Falon decided to quit, they were replaced by Kuks and Karol from Clockmaid in which I’m recently a bassist, and this whole music gained another level of energy and fun I guess. It’s really fresh. New boys are singing as well so we are working on using as many vocals as it’s possible. We didn’t consider 4 vocals while recording the material so now we are trying to rearrange it a bit. It’s really fun to work with these boys and since we’re playing together I enjoy playing gigs 10x more.

Any chance to see you in France anytime soon?

Hopefully this June, don’t know any details yet but just follow our fb. Cheers folks <3

Thanks to Nick at Stickman Records for arranging this interview. New album “III” is still available here. Find WEEDPECKER on Facebook and Bandcamp.