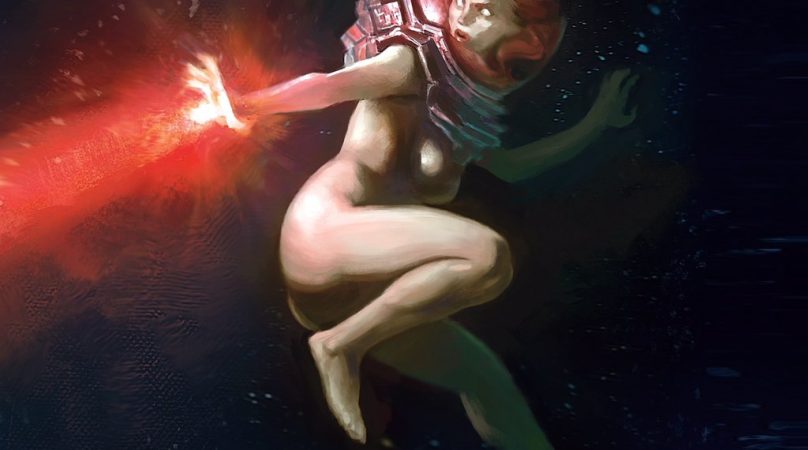 The likes of « Hippie Speedball », « Tits and Bones » and « Houndstooth » are rapid-fire bursts of pure excitable energy; less rock songs than pod races around each of Saturn’s rings. Guitarist Finn Ryan’s notoriously rapid left hand dances and solos sublimely across the frets only as fast as Koznik and Pantella can remain glued to his tail, dragging their head-swilling rhythms along in the trunk. There’s a playful joy to everything that TAB do that shines across perhaps more on Force Field than was evident on 2015’s excellent, but more disjointed Gravitron or the challenging single-track 40-minute instrumental The Local Fuzz. Out-and-out proto-tinged speed punk is the aim of the game more so on Force Field than on all previous efforts as the New Jersey power trio frankly rampage through the pacey « Humble Brag » and the hilariously-titled “Alaskan Thunder Fuck” with an ease of comfort and complexity that defies belief.

But it’s not just all about the speed. The every-part’s-a-chorus mentality of the likes of “Earth Shaker (Which Doobie U Be)” and the heartfelt power chords and earthy bass undertow of my personal album highlight “Crazy” demonstrate once again Koznik, Pantella and Ryan’s inherent ability to sound far stronger than the sum of their three parts whilst moving constantly and positively forward at a simply terrifying pace. « Fried Dyed and Layin to the Side » conforms to the mantra that every TAB record should have at least one, if not several, bombastic instrumentals, but in general throughout the Ryan/Koznik dual vocal match-ups have never sounded so honest, so sickly sweet and rich in tone.

Downsides? Non-existent really. Sure, « Super Highway » doesn’t quite capture the anthemic glory that it’s socio-political, fist-pumping lyrics perhaps promise and the bouncy carousel ride of « Liv A Little » doesn’t carry any of the chillaxed beauty of « Ice Age (Hey Baby) » which closed out Gravitron so memorably, but who cares when you’re having this much fun with the majority of your clothes still on. Or not. Whatever.