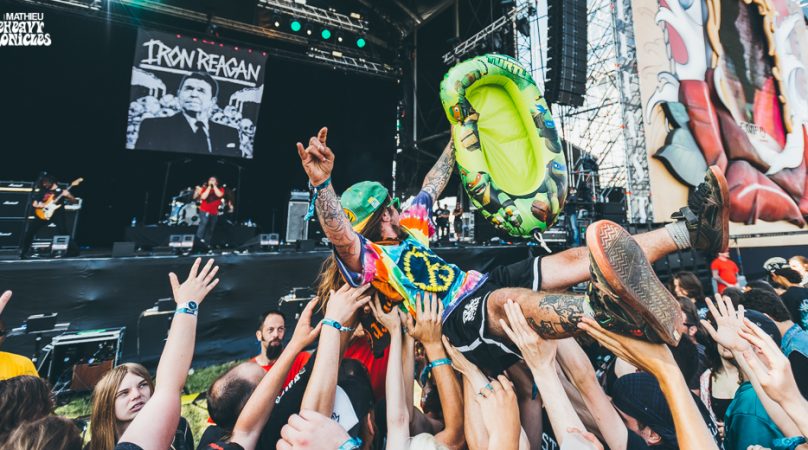 After 48 plain hours of metal, stoner and rock indulgence, this last day at HELLFEST kicks off with a lump in our throats: damn, time has gone too fast! But wait, there’s no fucking way we would go all depressed, so let’s just enjoy and cut it loose, yeah? To keep short, our Sunday has been devoted to filth, sludge and hardcore metal. Here’s the third and last part of our review with Superjoint Ritual, Iron Reagan, Red Fang, Eyehategod, Weedeater, and of course, our #1 ally of the weekend: beer. (PHOTOS: Gaël Mathieu)

Last night’s festivities have been so intense that lying in a bit is quite necessary, in order to give everything we got on this very last day at the festival. It’s 10.30am, I’m ready to roll under a blazing sun and watch US punk thrashers IRON REAGAN tear the Main Stage down. I had a crush for this band when they released their beast of a vid “Miserable Failure“, and knowing that it was formed by members of Municipal Waste, you can be sure you’re in for a – brutal – treat. To be honest, I didn’t think that having my ass kicked so early in the morning would be so enjoyable. The band is on top form and seems to have a blast battering our mugs, blasting out no less than 16 songs within thirty minutes (special mention to the 12 second long “Your Kid’s An Asshole”). This punk awakening might feel a bit tough for some peeps right now, yet circle pits form here and there to frontman Tony Foresta’s entire satisfaction. This show would have probably had more impact on the Warzone stage, but that was one proper beating for 10:30 in the morn’! 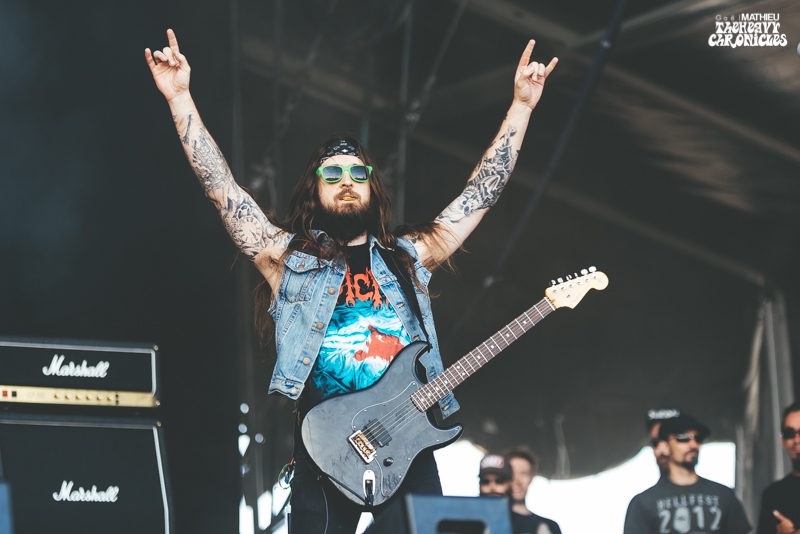 Time to head for the press area to interview the band (read right here). This was our last interview for the weekend, so what better reward than meeting our press/promoters buddies for a midday drink? At 1:30pm, our other buddies RED FANG take over the Main Stage in front of thousands and thousands of people; as for me, well, I’ll watch the performance from the screens. The band delivers all their classics for a 100% ballsy show – so ballsy that one of my colleagues described it as 90’s porn skatecore. It is believably one of the biggest crowds the Portland foursome has ever played, and yet, the boys feel at home! Some say they should have played the Valley instead (and I agree, given the frenzy it was in 2013), some others simply recognize that Red Fang have enough cojones to win over a Main Stage crowd (as shown by this performance). All I can say is, this band has earned their stripes thanks to countless shows over the years, from dodgy dive bars to the biggest festivals, and today’s “stage promotion” was absolutely legitimate. 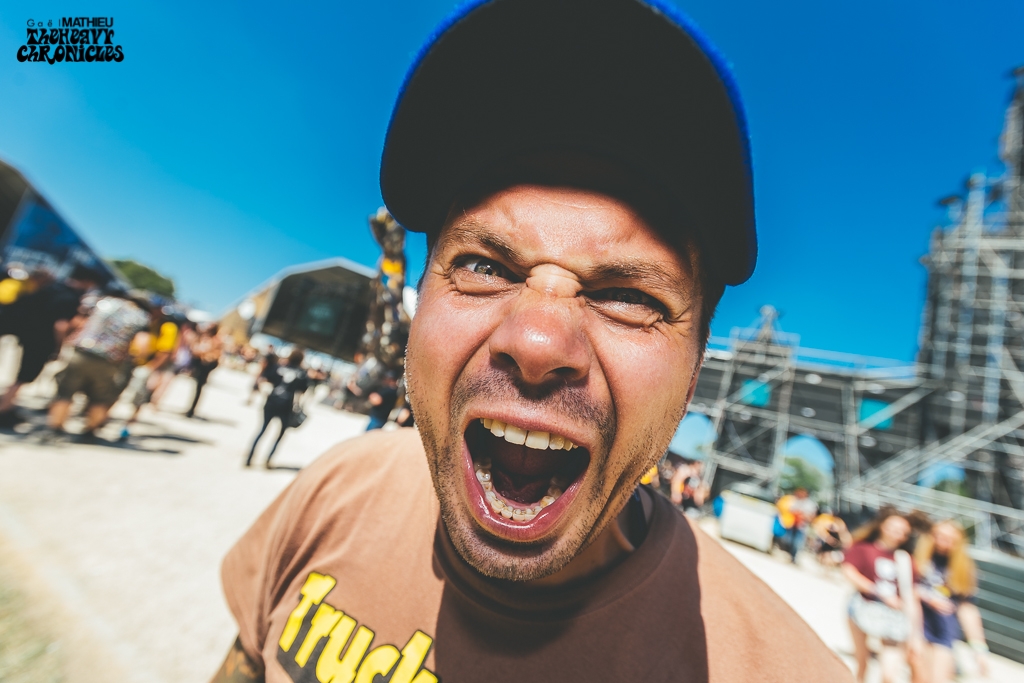 At 3 o’clock, we make for the Valley to see WEEDEATER. The most evil trio from North Carolina treat us to their ultimate classics, good stuff only, and only three songs off their latest outing “Goliathan” (which, to be honest, didn’t thrill me much… then again, Weedeater aren’t famed for reinventing themselves). Despite the hulking sound and band’s will to destroy everything, the crowd is slightly too worn-out/wasted/high (delete as appropriate) to follow the lead. Dammit guys, a metal gig isn’t worthy if the sweat is only dripping on one side! As always, Dixie Dave gets a wicked pleasure teasing his crowd, his bottle of Jim Beam spinning on the tip of his middle finger… Where the hell are Kronembourg’s “Désoiffeurs” when we most need them? 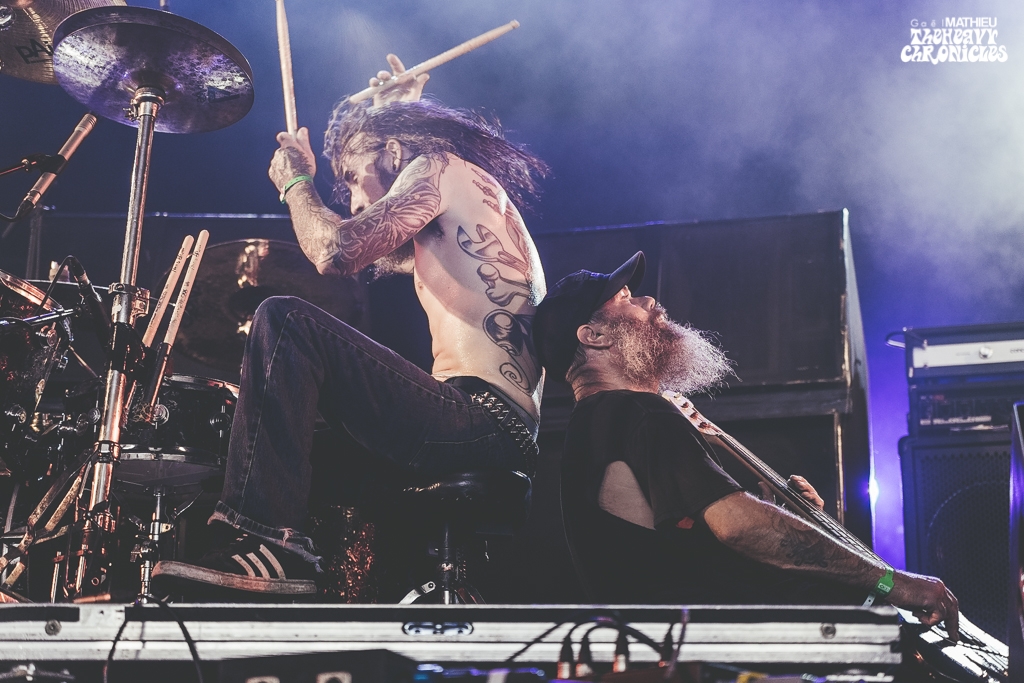 I have no idea what kind of spatiotemporal void (or should I say failure?) has made me miss out on Grave Pleasures – whereas everyone has been speaking highly of them, and I was also really curious to see this remastered version of Beastmilk – yet my ass lands magically in the Valley one hour later, this time for EYEHATEGOD. Watching EHG while lying in the grass is indeed a whole new concept, and definitely a once in a lifetime moment of horizontal violence. Especially when the NOLA bad boys decide to fire away with the overly brutal “Agitation! Propaganda!”. Fucking heavy. Every time I see EHG, I can’t help but think: “dayum, this band really has an incredible aura” (a filthy one, though). Sheer devotion is in the air, and you can feel every neutron of EHG’s historic sludge hitting each festival-goer’s like a bullet at point blank range. Explosive. Grand. The bar was set high for all heavy lovers, today. After Weedeater, this was one hell of a first shock treatment, and I can tell you we’re far from calling it quits… 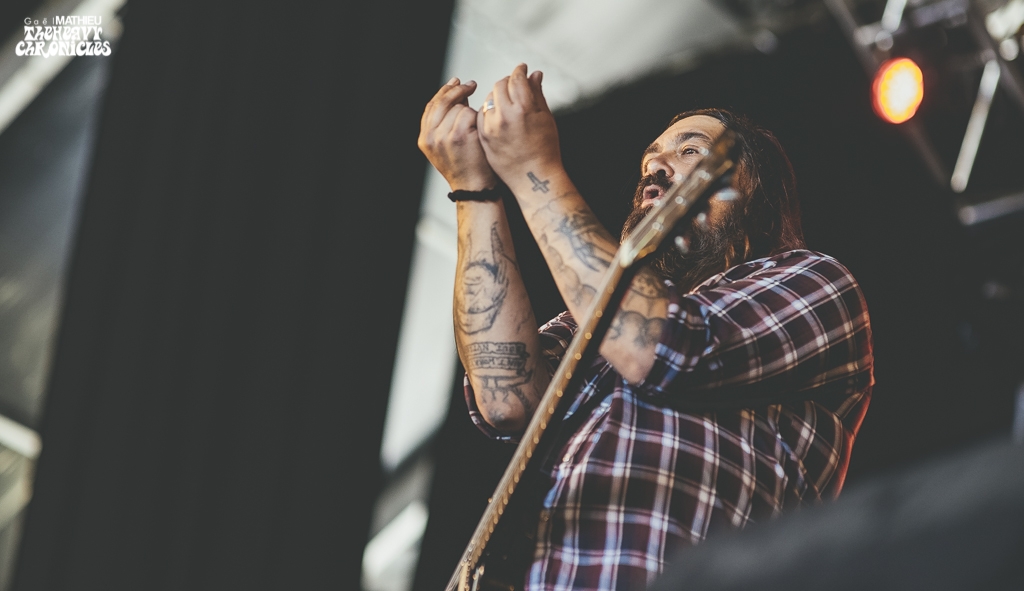 We may be the most-laid-back reviewers in the building, and comfortably lying may have made us see the EHG steamroller in a brand new light, fact is: it’s beer o’clock now. On our way to get some refreshments, we stumble upon Bryan Giles of Red Fang at the bar’s pinball machine. We try to show our skills a bit and fail dismally. Bryan take over the reigns and show us how it’s done, because “he sure plays a mean pinbaaaaall” (ta-duh-duh-duh-duh-duuuuh)…

Another spatiotemporal flaw later, and I’m back under the Valley tent for the ultimate and one of the most anticipated acts of the whole festival, especially for worshippers of the NOLA brotherhood like yours truly. Tonight signs the great return of hardcore supergroup SUPERJOINT RITUAL, and we’re about to face a fucking hurricane right now. Phil Anselmo delivers his best vocal performance in a loooong time, he seems to be more in his element screaming his lungs out than intending to “sing” some Down, and damn, we’re enjoying it. People from all metal sub-families are attending, the atmosphere is super friendly and Anselmo entertains his audience like no one else. The end of the set finishes us off, with anthems like “The Alcoholik”, “Fuck Your Enemy”, “Waiting For The Turning Point” and Superjoint make the most of their ultimate and eponymous song to wrap up three days of intense metallization. Fucking hell, that was good. 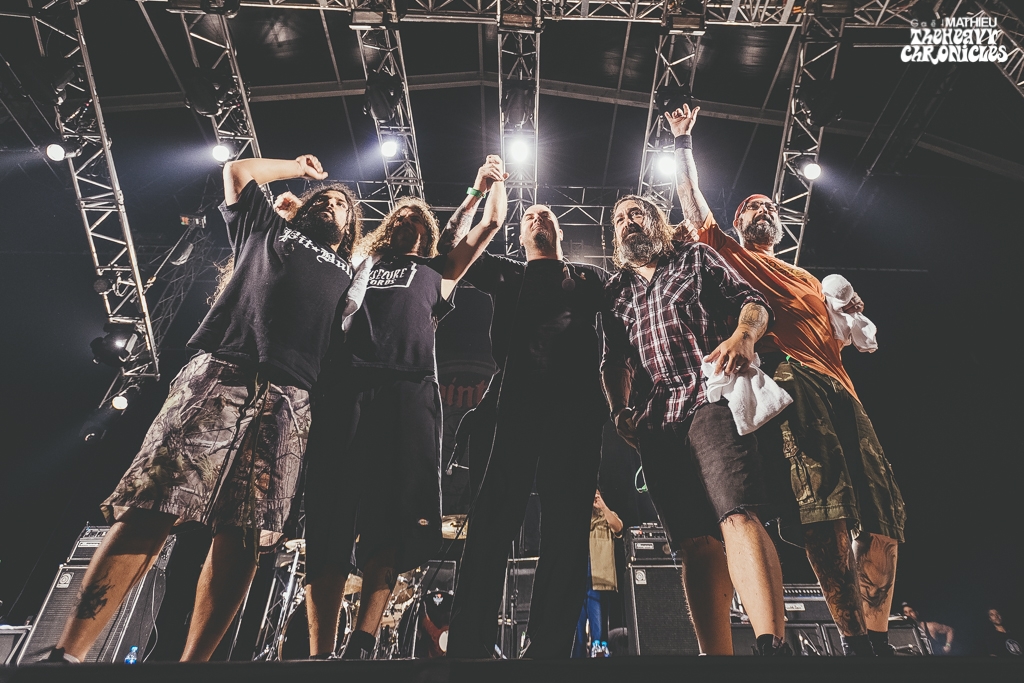 I might not be wrong when telling you that Hellfest is one of the most ambitious metal festivals of our time. They’ve always been 100% in tune with their audience, and never fail to spoil and surprise us each and every year. Each time, we feel like the event has been taken up a notch, and at the end of the weekend, we always wonder how the promoters will do better than that already. Hellfest, you fucking rule our metal world. THANK YOU, and see you next year!

READ REVIEWS OF THE FRIDAY AND SATURDAY