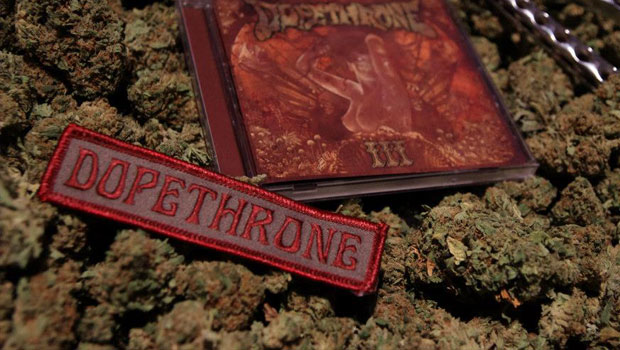 Canada’s filthiest trio DOPETHRONE is back on our lands, all set to flood Europe with their unique and diabolic bluesy sludge. Icing on the cake: UK heavy mongers GURT are joining the adventure, for what will be their first mainland tour ever. Whiplashes in sight and eargasms guaranteed. Dead Pig Entertainment and T.H.C give you the chance to win your tickets for any gig of this brilliant Euro invasion. Enter the competition now.

Americas’ filthiest and nuttiest doom trio is about to land on the Old continent to spread their occult psychotropic riffs! No one will ever contest (or they died before being able to do it) the crushing power and addiction induced by their EP “Dark Foil” et “III”… As heavy and groovy as Weedeater, as neurotic as Eyehategod, and as acid as Electric Wizard: DOPETHRONE has set themselves as a band of reference among the international weed metal scene. Facebook – Bandcamp

Not only GURT was a major discovery of Desertfest 2013, but they also now count as one of Great Britain’s most promising sludge acts, with their countless EPs and solid live performances. These four lads may come from London, their metal is so greasy and filled with blues that you’d instantly feel like you’re getting pissed in the middle of Lousiana’s swamps. To this tasty mixture of fat riffs and Bourbon grooves, add Gareth Kelly’s raging vocals and the band’s on-stage boldness. Once you’d have tasted, you’ll need to get more, more, more… until your desire is quenched.

[CLOSED] Win your pass for RIFF RITUAL FEST in Barcelona!