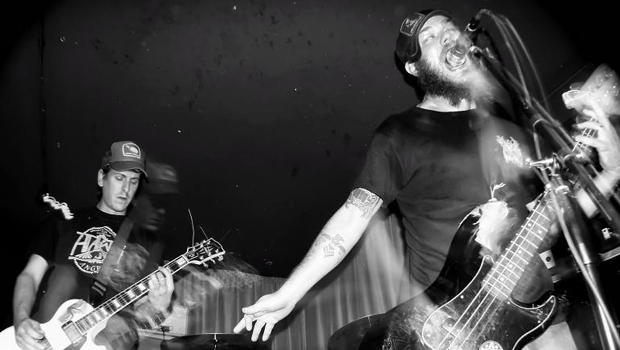 There’s no other southern sludge band like WEEDEATER. I mean, they’ve been marking the music world with their trademark sludge metal filled with that filthy yet very delectable blues taste for almost twenty years now. They’ve put on four goddamn albums that all ended up on the record shelves of every sludge and stoner fan around the world. They’re known for being insane live performers, fronted by their even more insane groove monger and vocalist “Dixie” Dave Collins. So I must admit I was a bit nervous before meeting the legendary trio at Desertfest London. I sure was. In the end, Dixie Collins and Dave Sheperd couldn’t be friendlier when they both welcomed me at the back of Camden’s mythic Electric Ballroom. Needless to say the show that ensued in front of a packed Ballroom with new drummer Travis Owen turned out to be EPIC AS FUCK. Meet the guy for whom this expression might have been invented. Meet Dixie.

First of all, I’d like to start this interview with a quote from that interview you did with The Quietus, which drew my attention: « If we end up with zombies rolling about, I’ll be prepared for that ». Can you comment that sentence?

Dixie Collins (bass & vocals): (laughs) We’re armed to the teeth pretty much in the South, so we could probably handle ourselves if some sort of zombie apocalypse was happening. I have shot myself before, therefore I’m not afraid to shoot someone else. Whether they’d be living or dead.

Your last album « Jason… The Dragon » was released in 2011, so everyone’s obviously expecting some new stuff from Weedeater now. Do you have something in the works?

Dixie: We’re supposed to be going to Steve Albini’s EA studio in Chicago some time late summer to record the next Weedeater album, tentatively entitled « Glyphen ». It should be out next year before the summer.

Do you have some new material written already?

Will you play some tonight for the lovely Desertfest crowd?

Dixie: Oh no no, we want to keep that a secret… (he grins)

You played Roadburn a couple of years ago, and it seems like there has been a market for this kind of heavy festival, as new independent events are popping up almost every year now in Europe.

Dixie: We started doing the European scene a few years ago and it seems to getting better and better every year, which is awesome! All the spring and summer time festivals all over Europe are a lot of fun: Hellfest, Roadburn, all of them.

And do you feel like there’s a different response in the U.S. regarding this specific music scene?

Dixie: I believe it’s more well-received in Europe. There are a few strong homes in the US, you know. Denver is a very good metal city, there’s Chicago, Northern California, Vancouver is also really good… But not as good as how we’re received here, in my opinion.

You mean in terms of crowd, or more generally with promoters and people in that “business”?

Dixie: In terms of everything! Hospitality is great, they’re taking care of us here.

You’ve been around since 1997, what is your own experience of the noticeable evolution among the stoner and doom scene? I mean, you’ve always stayed true to yourselves, so how have you felt all the changes, with all these new bands coming out, all these burgeoning promoters and medias …

Dixie: We’re glad to be a part of it. It’s like a full circle coming around to more people getting in stuff like this, when we first started doing this, people were like « what the fuck is that? », you know? But we do the same thing over, and over, and over… and over. (laughs)

What are the bands you really like at the moment and you’d like to recommend to everyone out there?

Dixie: I don’t know if they’ve heard of this little band called The Melvins (laughs), but I’d definitely recommend them to everyone. ASG are a very good band, they’re very good friends and our neighbours, they live down the street around the corner. If you haven’t heard them, you should listen to them.

Ok so, the last question of this interview is pretty stupid. There are a lot of beards in the sludge/stoner/doom scene and you’re obviously a proud representative of the movement… Why so many beards, Dixie?

Dixie: Bunch of beardos… Because it’s a pain in the ass to shave, for one thing!

So it’s just laziness, then?

Dixie: I mean, it’s not natural. Getting up in the morning and scraping metal against your face every day, it sounds like a pain in the ass to me. Putting on a suit, going to work… Weird stuff, I’ve never figured it out.

Not natural at all.

Anything you’d like to add to our dear readers?

Dixie: I know this interview will be posted afterwards, but come and get fucked up with us tonight and just have a good time!

And hell, everyone did…