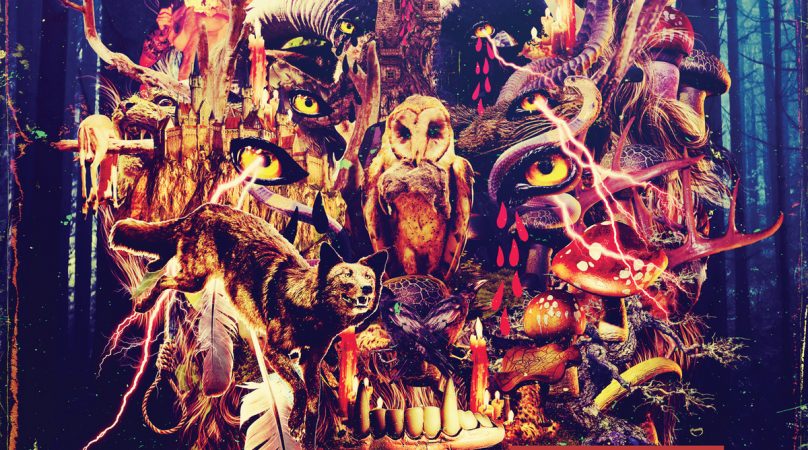 Forget everything you thought you knew about RED FANG, because the Portland foursome decided not to rest on their laurels. They’re pissed, damn pissed off. Just take a look at their two previous classic records “Red Fang” and “Murder The Mountains” and… No actually, put them in your records collection, because “Whales & Leeches” has preeeetty much nothing to do with all this. Let’s just say that they left behind 80% of their characteristically catchy hooks to focus on energy. The most destructive and crushing I’ve had the chance to get squashed by in ages. I’ve read shitloads of thesis about the new Red Fang record, most of them being quite flattering. I’ve read tons of comments on the Internet, claiming that it was the record of the year… And I have to admit it starts off with a bang, with supersonic missile “DOEN”. Merciless punk rhythm, fat speed riffs, vocals that sound like war chants… Mayhem! The pace slows down a little bit on “Blood Like Cream”, but after two verses, Aaron’s vocals get stuck in mind like a good old song. And when he starts singing that chorus “Turn ip up, turn it up, turn it uuuuup!“, the game is over. You lose control. It’s not by chance if many dudes had a hell of a time crowdsurfing on that very song at Hellfest 2013.

Given the few songs that follow, we can say that Red Fang’s sounds has gotten faster, but definitely not at the cost of heaviness. This is some kind of half-punk/half-sludge Frankenstein monster we’ve got here, because hell yeah, all these tracks are a hundred times darker than the “Murder The Mountains” party anthems. There’s something repetitive, almost throbbing in there. Something punk as fuck. One song, two songs, then three… My brain has switched off unwittingly, but it turn itself on again when “Behind The Light” and its laid-back vocals start, which makes me – it never happens usually – notice the lyrics, as Aaron talks about the life on the road: “We’re caught so far away from home/the days and nights are all the same/it’s so insane to be alone“. It seems as if these two years on the road made them have all sorts of dark feelings, and now it’s time to exorcise the demons, time to let it all go. Yeah, I can totally imagine there’s a huuuge gap between their daily grind in Portland and the touring life of four rockers who quickly became worshipped by the whole metal community. It may be hard to remain 100% faithful, I guess.

Now beware, we’re about to reach the climax of this record, not to say the climax of a whole year of rock. “Dawn Rising” is THE song that has prevented me from listening to the rest of the record for more than three weeks, and the fact that Mike Scheidt of YOB is nailing it on vocals has a lot to do with that. Death rattle. Yep, the song starts on a death rattle, well actually, four or five. The guitars are down-tuned, the bass is roaring like a titan, and Aaron’s slow singing sounds ritual, almost sacrificial. And when Scheidt gets in, the whole song takes on an insane dimension. “Dawn Rising” is evil, it’ll bewitch you, it’ll force you to press the repeat button as long as you’re alive, you’ll turn up the volume at the maximum wherever you are, you’ll get delighted until you get deaf. The following song “Failure” has this Mastodon-ish feel, which is probably due to the weird superposition of guitar(s) over Beam’s voice and Giles’ gruff vocals, or simply because of the mystic atmosphere that oozes from it. Yet it’s just the tip of the iceberg, as “1516” gets deeper into the darkness and heaviness, dragging us six feet under. “There’s no way oooooouuuuut…“. Darkness, heaviness.

To me, the major difference between this record and the previous ones is that the sound could be heavy as hell, yet an insane and contagious joviality came from it, while now, it is heavy, it is dark, it goes at full speed, it is dark. We’ll probably party less on “Whales & Leeches” than we used to do on the two other records, or at least, in a different way. But I’m not worried anyway, because it would have been impossible to put out another perfect full-length, that’s why the guys chose to explore their own sound, going further, for a try. And it works, it works damn good on stage, as we were able to notice at many festivals this summer. In the end, “Whales & Leeches” is not the record of the year, but it proves once again that Red Fang didn’t write this record in order to please people, and they’ll follow their own way until someone tries to stop them. And that’s exactly the reason why we love them.