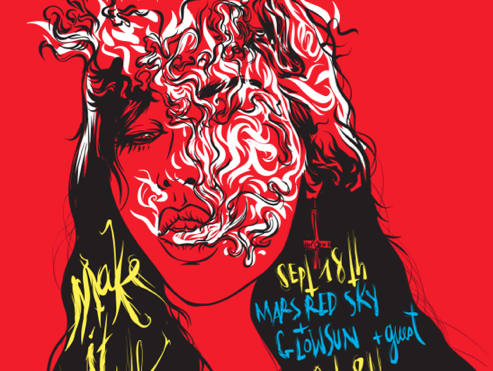 Bordeaux is finally about to get pinpointed on the stoner map, thanks to the initiative of a very few passionante people (including yours truly) and independent label MRS Red Sound. This fall, Bordeaux will welcome its monthly heavy psyche sessions with MAKE IT SABBATHY : heavy/stoner/psyche headliners and DJ et VJ (among oher goodies). The first edition will be a 100% French one with MARS RED SKY and GLOWSUN. The Heavy Chronicles makes you win your ticket, so join the movement !

As pillars of the European stoner scene, MARS RED SKY imposed their trademark of heavy grooves and aerial melodic riffs carried by Julien Pras’ ethereal vocals. Between doom and 70’s psyche pop, Mars Red Sky’s music is intriguing yet federative. After the success of their first eponymous record released in April 2011, the band got catapulted on big stages such as Roadburn, SXSW, or Desertfest, where they delivered massive and addictive performance. This fall, Mars Red Sky will do some extensive touring in South American then the U.S, where they will record their next full-length. This gig at Make It Sabbathy is without a doubt a good opportunity to see before they’d go for the American adventure.

Performing alongside music references like Brant Bjork or Karma To Burn, stoner rock band GLOWSUN has managed to win over the French and European crowds, offering mystic experiences rather than average rock performances. In the manner of their last record “Eternal Season”, the Lille based trio likes to take its time when it comes to unveiling the magic : it’s only when Johan Jaccob’s vibrating riff power is unleashed that we understand that under very peaceful appearances, GLOWSUN is actually a live beast. Gliding somewhere between the My Sleeping Karma constellation and the Lowrider galaxy, their “glowing sun” won’t stop dazzling us… [CONTEST CLOSED] Win a pass for UP IN SMOKE FESTIVAL with Pentagram, Colour Haze, Truckfighters, Radio Moscow, My Sleeping Karma…